Yesterday: the freedom document for slaves of Maxwell Chambers 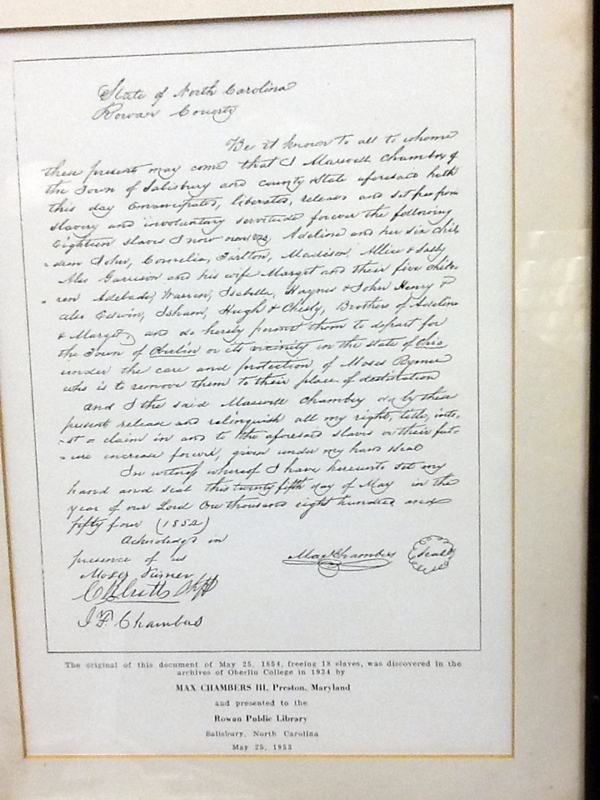 Here is a framed copy of the freedom paper 18 slaves from Salisbury carried with them to Oberlin, Ohio, after Maxwell Chambers freed them May 25, 1854. In this document, the desires of which also had been part of his will, Chambers “emancipates, liberates, releases” and sets free from “slavery and involuntary servitude” slaves he spells out in following lines. They included Adeline Cowan and her six children. Garrison and Marget (also referred to as Margaret in later years) Chambers and their five children and four brothers of Adeline and Marget — Edwin, Isham, Chesly and Hugh — all of whom took the last name of “Haynes.” Chambers also spelled out in the freedom paper that these freed men, women and children were to be taken to Oberlin under the “care and protection” of Moses Rymer. This copy of the freedom paper is at Rowan Public Library. A note at the bottom says, “The original of this document of May 25, 1854, freeing 18 slaves, was discovered in the archives of Oberlin College in 1924 by Max Chambers III, Preston, Maryland, and presented to the Rowan Public Library, Salisbury, North Carolina, May 25, 1953. That would have been Rowan County’s bicentennial year. Salisbury’s Maxwell Chambers would die in 1855 having not released all of his slaves, though an additional 48 freed men, women and children also traveled from Salisbury to Oberlin that year. In that day, Oberlin was known as a safe place for freed slaves to live and work and also as a stop on the Underground Railroad for slaves on the run toward Canada.