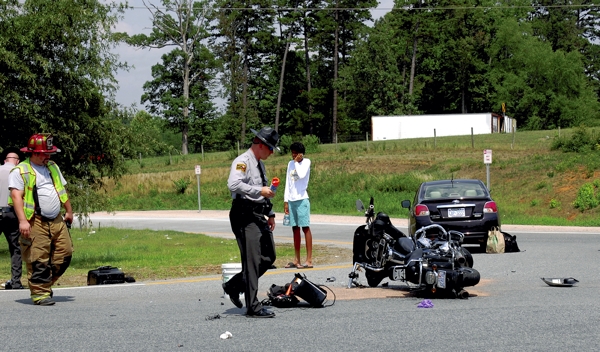 Mark Wineka/Salisbury Post Troopers and emergency workers examine the site on Peeler Road where a motorcycle collided with a Subaru Impreza.

SALISBURY — A man and woman were injured and taken to Novant Health Rowan Medical Center Sunday afternoon when their motorcycle hit the side of a car on Peeler Road near the northbound entry ramp to Interstate 85.

The accident occurred about 2:30 p.m. close to Love’s Travel Stop.

The driver of the Subaru Impreza involved in the accident was not injured. An air bag deployed after the motorcycle made impact on the right passenger side of the car. Wrecker services were called to take both the Subaru and the motorcycle away from the scene.

Troopers with the N.C. Highway Patrol were investigating, and names of those involved in the accident were not immediately available.

South Salisbury Fire Department Assistant Chief Jason Burnett said he was not sure the direction either of the vehicles was traveling. South Salisbury responded and helped with traffic control along Peeler Road and as northbound traffic exited the interstate and came up the ramp.

The Life of Riley: When Carl Hubbell was king

SALISBURY — Anyone who knows 91-year-old Joe Riley recognizes the man as a storyteller, and a pretty good one. We spent... read more