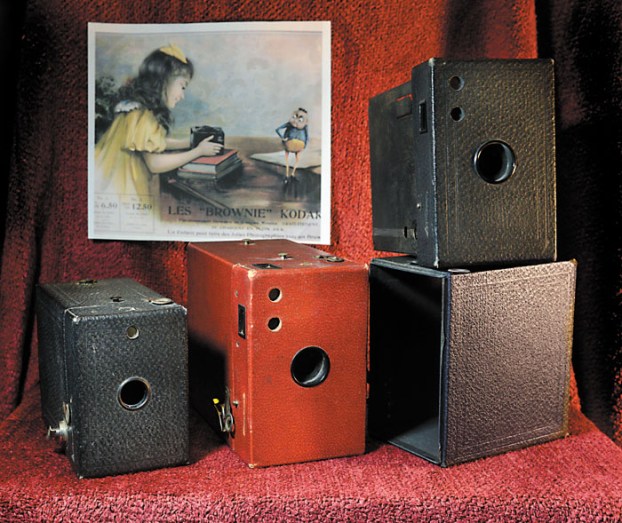 These Kodak Brownie cameras are some of the earliest produced. Left to right is Model #120, Model #116, and Model #116. The center red camera and the right hand black camera are the same models just different color. On the right the camera is open to show the cardboard inside. The advertisement in back is a French ad showing the Brownie camera and the cartoon character Brownie that the cameras were named after. photo by Wayne Hinshaw, for the Salisbury Post

While digging around in the back of your closet or the bottom of your sock drawer or even in the dusty, hot attic, you find an old shirt box filled with small black and white photos from your family’s past.  You don’t even know who all these people are, but you know they are important to your past while growing up or even to your grandparents who are long gone  to their places in eternity.

Did you ever stop and think about where these photos came from or how were they taken?  If you are really lucky you might even discover an old black box camera or a fancy folding camera.  Maybe these photos were made with this handheld camera steadied at waist level height, recording a birthday or Christmas morning.

There is a good possibility these photos were created in an Eastman Kodak Brownie camera. Karen Frisch-Ripley writes in her book “Unlocking the Secrets in Old Photographs”: “With the arrival of the twentieth century, nearly everyone owned a Brownie camera, and billions of photographs were gradually taken by  average individuals. … ‘You push the button, we do the rest’ was Kodak’s slogan then. By the turn of the century, it was rare that a person had not had his picture taken at least once.”

Let’s explore the Brownie camera legacy together. I have gathered information from the Oshawa Community Museum and Archives in Oshawa, Ontario, Canada, and the George Eastman House Museum in Rochester, N.Y., which I visited several years ago. Both have extensive collections of Brownie cameras and their history.

George Eastman was the genius behind the invention of the Kodak company and camera equipment. Around 1900 he developed a Brownie camera that would be easy to use for photos at home. The simple camera had a fixed shutter speed, no aperture control and no focusing abilities. It was a cardboard box covered with an imitation leather outside. The shutter was metal. The viewfinder for viewing your photo subject was both vertical and horizontal, depending on whether the camera was turned on its side or held upright. The film spools were wooden at first, and later aluminum. The first Brownies could be purchased for $1 and came preloaded with a roll of film for capturing eight photos. Eastman sold 250,000 cameras the first year. Extra film cost 15 cents per roll.

Let me back up a minute and talk about the names Brownie and Kodak.

In the 1880s author and illustrator Palmer Cox designed and marketed Brownie dolls, candies, ice creams (and the list goes on) for children. A Brownie was a make-believe spirit or goblin. Being like a fairy, the Browne had a good nature. Children recognized and loved the little brown character. Eastman picked the name Brownie to appeal to children.

Eastman just made up the name “Kodak” around 1880. The letter “K” came from his mother’s maiden name, Kilbourn.  He played with the vowels and consonants until he came up with a word that was easy to say — Kodak.

The majority of the Brownies were the low-cost box cameras made between 1904 and 1926.  In 1910 the cardboard box camera bodies became aluminum, with an increase in cost to $3.  Then there was the color red model “C” Brownie that cost $4.

An early Kodak advertisement read, “Boys! This is the camera you ought to have, to get pictures of your games — the places you go this summer — your chum making a boat and the swimming hole; everywhere there’s fun, there’s a good subject for a picture.”

There is a story that the famous photographer Ansel Adams’ first camera, while he was still a child, was a black Brownie box camera given to him by his parents in June 1916.

Eventually the Brownies evolved into folding cameras. You could close the front of the camera. Optional features were added such as shutter speeds and aperture openings. The viewfinder could be rotated.  Most of these folding camera cost $10-$15 and were made until 1926.

The term “snapshot” for photos started in the 1860s long before Kodak and the Brownie cameras. But the  word snapshot took hold and stuck with the handheld Brownies. With the Brownies, the snapshot had a new birth.  For 70 years, various models of Brownies were manufactured. They included names such as the Brownie Target Six-20, the 1930s’ Beau Brownie with an enameled art-deco front and Brownie Hawkeye.  All told, there were 125 different Brownie models.

The Brownie line ended in the late 1950s with the Brownie Starmatic. Some of these Starmatics had flash attachments and cost $34.50.  The Kodak Brownie Starflash camera was marketed in 1957 as the first Kodak camera with a built-in flash. It came in black, red, white, and blue.

Kodak  “gave photography to the world” in the form of a Brownie.

“You push the button, we do the rest.”

Editor’s note: Salisbury native David Freeze is cycling from Mobile, Ala., to Toronto, Ontario, Canada. The Post is chronicling each... read more