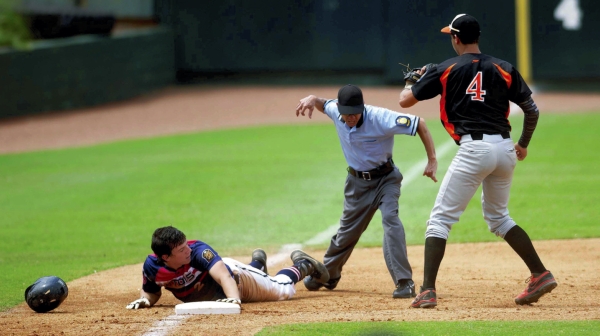 SALISBURY — At this point in the grueling American Legion state baseball tournament, the pitching ranks normally start to get a little thin for the survivors.

The victory assures the HiToms (28-9) a spot in the tournament’s final day of competition on Tuesday with a 1 p.m. game against the loser of the Rowan County-Caldwell County game. Either way, Post 87 will have to win twice on Tuesday to claim the state American Legion title and a berth in the upcoming southeast regional in Asheboro. High Point is now 3-1 in the tournament.

Hope Mills (23-7) ended its Legion season with the setback and were perhaps feeling the effects of Sunday night’s deflating 12-8 loss to Rowan, despite pounding out 19 hits. The Boosters had also been the only team to beat High Point in the tourney,  a 6-5 win on Saturday.

Based on the offensive prowess displayed so far by both teams, Monday’s elimination game had all the earmarks of a pending slug-fest. When High Point’s Evan Edwards led off the bottom of the first inning with a scorching line drive homer to left field, off Hope Mills starter Logan Haines, the expectations seemed accurate.

But Stanley, who is headed to play for  N.C. A&T in the fall, proceeded to stifle Hope Mills inning after inning,  effectively scattering seven hits,  striking out five and walking two. He also got the backing of his defense with a pair of critical double plays to end mild threats.

“Matt showed up big on a day when we should have hit the ball better, but we didn’t” said Post 87 coach Rob Shore. “That is the best I have ever seen Matt pitch. That was impressive.”

High Point expanded its lead to 3-0 in the third inning on a walk to Evans, then back to back singles by Colin Lipke and Zach McLean. Hope Mills finally put a chink in Stanley’s armor in the top of the seventh frame when a two-out double by shortstop Gaitlin Pate brought in Justin Walke to make the score 3-1.

Post 87 added a key insurance run in the bottom of the seventh on Rhyne Stanley’s single and Lipke’s double to make it 4-1. On the play, Lipke was gunned down trying for third on a perfect relay from center fielder Walke to shortstop Pate to catcher Garret Johnson and back to third baseman Trey Jacobs.

Hope Mills starter Haines departed with one out in the eighth inning after allowing a single by Jake Moebius.  Reliever Zach Bagley came in, threw one pitch and induced a 4-6-3 double play to end the inning.

But Stanley put Hope Mills down quickly in the top of the ninth inning to secure the 4-1 win. He rarely was in trouble during the game, allowing only three runners to reach third and stranding nine.

“As a pitcher, you are going to get in trouble some innings, “Stanley said. “But you just have to phase it out and just come after the hitter. You just worry about what you can control.”

What High Point does control is a chance to win a state title, starting Tuesday afternoon. Shore indicated he will give the ball to his ace Bryce Lance in the first game, then pitch by committee if it comes down to one game for all the marbles Tuesday night.

“”But what we really need to do is just give ourselves a chance to get to that last game,” Shore said.