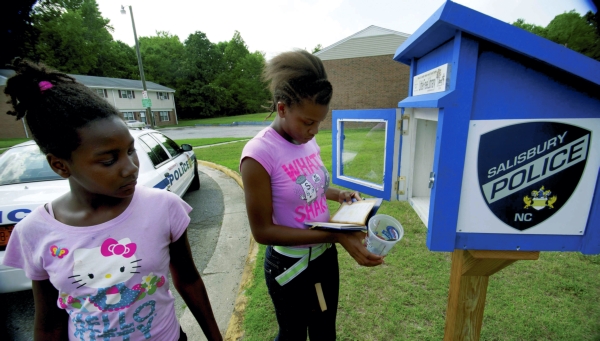 JON C. LAKEY / SALISBURY POST Jalera Hoskins (12) and Judea White (14) come and check out the books that are left in the Little Free Library at Zion Hills Apartments.

Less than a year and a half ago, Carolyn Rice had grown accustomed to gunfire in her West End neighborhood. Community advocates and other West End residents pleaded with the city to do something to stop the gun violence that they say had reached epidemic proportions in the community of about 2,100 residents.

A series of community meetings and structural changes within the Salisbury Police Department have led the way to an overall reduction in property and violent crimes.

Not all of the changes that have taken place since early 2014 have been successful. However, residents and law enforcement have proven they are determined to return the neighborhood to a flourishing community.

In the spring of 2014, several community leaders gathered with West End residents for a series of meetings to discuss the problems that plagued the community and to look for solutions. Residents like Carolyn Rice said they wanted to see more police presence, they wanted the crime rate to decrease and wanted activities for the youth who lived there.

Rice, who attended those community meetings, said she’s seen a change in her neighborhood.

“They are definitely patrolling. I’m not taking that away from them. It has improved, but whatever it takes to keep it safe is a part of that factor,” she said.

Rice said one of the changes she’s spoken about for over a year that she’s still waiting to come to fruition is better lighting in the West End.

She said she’s spoken with city officials and Duke Energy and neither entity seems to have an answer.

Better lighting, she said, could deter more crime and make it safer for residents who live there.

Salisbury Police command staff and community relations officers Annice Chunn and Reuben Ijames have met with various groups in the West End and other communities throughout the city.

The officers meet to inform the residents of crimes in their areas, how residents can keep themselves safe and how to report a crime if it happens.

“He informs us of what’s going on and we get updates on West End,” Carroll said.

“His presence is nice,” she said.

“We want them to know police are available for them,” she said of police presence.

Although the crime in the Chestnut Hills neighborhood isn’t of a similar caliber as West End, Mitchell said it could easily change.

The makeup of the neighborhoods is almost identical; both have a number of elderly and retirees in the community and there are plenty of dilapidated or vacant homes with absentee landlords. Police have said vacant homes can be a hotbed of criminal activity.

As an answer to the crime issues, Collins took the police department from a district system to a four-quadrant system, allowing more officers per shift in a given area. Officers in the quadrant would encompass an 11 person team that included a traffic officer and two supervisors.

The department also had one Police Interdiction Team, or PIT unit, but added another in April 2014.

The five-member team doesn’t typically respond to routine calls for service, but instead, they work proactively in the city’s crime hot spots. The second PIT unit began in the West End, but has since branched into other troubled neighborhoods or streets throughout the city.

PIT officers choose their locations based on data, their own observances of crimes, citizen complaints, crime trends and intelligence information.

Patrol officers are also tasked to do the same as the PIT unit. However, the PIT unit is assigned to a specific area for a given time.

“PIT has been very active in trying to not only deal aggressively with crime, but seek to impact youth or citizens,” Collins said.

In mid-June, members of the Salisbury Police PIT unit and some community volunteers/leaders established a Little Free Library in the Zion Hills Apartment complex, located off Brenner Avenue. The small wooden box is designed to provide children and adults within that complex an opportunity to read books at no cost to them. Everyone is encouraged to read a book and donate some books themselves.

As quick as officers refill the library is as quick as the children read the books they’ve brought.

Jalera Hoskins, who lives in the complex, said she checks out one or two books almost every day.

The 12-year-old said the Little Free Library is a matter of convenience for her and she’s enjoyed the books so far.

The PIT unit is currently working on adding a library in another public housing neighborhood.

Sgt. R. B. Willis, who heads one of the street crimes units, said the PIT crew is the proactive branch of the enforcement, but team members also take time out to visit with children or residents in the neighborhood.
He said it’s nothing to see an officer play basketball with a child or have an impromptu arm wrestling match.

Willis said he feels as though the PIT unit and other officers’ presence is still needed, but he’s seen a decrease in gun violence in the West End.

It’s been a little over a year since Community Relations Officer Reuben Ijames hit the street to literally knock on every single door in the West End community. He’s made it a point to be a liaison between the West End residents and the Salisbury Police Department.

Earlier this month, the police department closed its substation located in the West End at Hall’s Gym because of a lack of use by the community. In the year that it was at its West Bank Street location, Collins said, it only received three visitors. Ijames was the officer who manned the substation four hours a week.

He’s returned to patrolling the neighborhood and actively meeting citizens, something residents say they want.

The majority of the crimes West End residents spoke about included violent crimes such as aggravated assaults and murders and property crimes like burglaries, robberies and larcenies. These specific crimes are index crimes and also include homicide, rape and motor vehicle thefts.

In 2014, there were 16 aggravated assaults reported and that number was reduced by two this year. This year there was 27 burglaries reported and a year ago 52 burglaries were reported or a reduction by 48 percent.

Larcenies were reduced by 40 percent and went from 55 reported larcenies in 2014 to 33 larcenies this year. Motor vehicle thefts were only reduced by one in the timeframe, going from six in 2014 to five this year.

The total crime in the West End community saw an overall reduction of 39.7 percent in the time frame tracked.

By Susan Shinn For the Salisbury Post Each summer for the past four years, Curt Ladig has visited the Community... read more