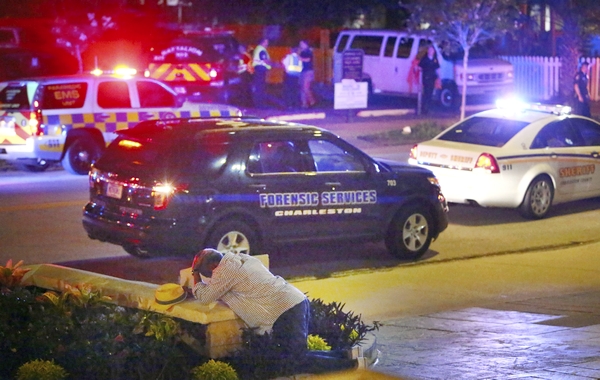 A man kneels across the street from the Emanuel AME Church following a shooting Wednesday, June 17, 2015, in Charleston, S.C. (Wade Spees/The Post And Courier via AP)

“For every person killed by Muslims extremists, there have been 4,300 homicides from other threats.”

After five American soldiers were murdered in Chattanooga, Tennessee by a deranged Muslim gunman, the nation reacted with anger, shock and fear.

“Little did I know that terror would strike America in the heartland,” said Rep. Michael McCaul of Texas, chairman of the House Homeland Security Committee. “What happened yesterday can unfortunately happen anywhere, anyplace.”

The anger and shock are totally justified. Casualties are expected on battlefields in Afghanistan, not in recruiting offices in Tennessee. The fear stoked by McCaul and others, however, is unfortunate. In theory, an attack could indeed come “anywhere, anyplace.” But in fact, such incidents are extremely rare, and overreacting to terrorists only enhances their influence.

The point of terrorism is not to deplete an army, seize territory or win a battle. The aim of an attack is purely symbolic — to provoke panic, to demoralize and destabilize your enemy. We should not help the jihadists by exaggerating their threat.

A recent study by New America, a Washington research center, concludes that in the 14 years since 9/11, 74 Americans have been killed in what can be defined as terrorist attacks. That comes to roughly five a year. (Those figures do not include the five servicemen in Chattanooga.)

Domestic killers like Dylann Roof, the white supremacist gunman in Charleston, are far more common than foreign-inspired assailants like Mohammad Youssef Abdulazeez, the Chattanooga shooter. Of the 74 politically motivated murders documented by New America, only 26, barely one in three, were carried out by Muslim jihadists.

Obviously these figures depend, to some extent, on definitions. But the findings square with other studies conducted by reputable researchers.

Charles Kurzman, a professor of sociology at the University of North Carolina, and David Schanzer, a terrorism expert at Duke, surveyed law-enforcement agencies and reported their views in The New York Times. Their main finding? “The main terrorist threat in the United States is not from violent Muslim extremists, but from right-wing extremists.”

Put another way: There have been 215,000 murders in the United States since 9/11. “For every person killed by Muslims extremists,” the authors calculate, “there have been 4,300 homicides from other threats.”

A report by Stratfor, a global intelligence company, came to a similar conclusion: “Terrorism does not equal jihadism.”

“Long before jihadism reared its head in the United States,” notes the Stratfor report, homegrown assassins emerged “from a wide array of ethnic and religious backgrounds.” They ranged from Leon Czolgosz, the anarchist who shot President William McKinley, to James Earl Ray, killer of Martin Luther King.

Before 9/11, the deadliest terrorist attack on American soil was conducted by Timothy McVeigh and Terry Nichols, native-born white Christians who bombed the Murrah Federal Building in Oklahoma City in 1995, killing 168.

“Public debates on terrorism focus intensely on Muslims,” write Kurzman and Schanzer. “But this focus does not square with the low number of plots in the United States by Muslims, and it does a disservice to a minority group that suffers from increasingly hostile public opinion.”

Yet that intense focus on Muslims persists, and on some level, that’s understandable. We’re still suffering from the aftershocks of 9/11, and are still plagued by the nightmarish question: What if the next jihadist acquires a nuclear bomb, not just a hijacked airplane?

Our enemies, moreover, are very clever at exploiting modern communications technology. They don’t have to kill soldiers in Chattanooga to foment anxiety. They can videotape the execution of hostages in Syria and scare people quite effectively from thousands of miles away.

Their use of technology to recruit and indoctrinate footsoldiers like Abdulazeez also enhances the “threat environment,” as McCaul calls it. “They are permeating our society and this country through the Internet and social media, and it is very, very difficult to stop it.”

All these factors aggravate our sense of vulnerability to foreign foes. “We understand white supremacists,” said William Braniff, a terrorism expert at the University of Maryland, to the Times. “We don’t really feel like we understand al-Qaida, which seems too complex and foreign to grasp.”

Still, it’s important to respond rationally to the tragedy of Chattanooga. Yes, be angry. Be vigilant. Be prepared.

But don’t overreact. Don’t vilify the entire Muslim community because of a few monsters. And don’t serve the terrorists’ purpose by inflating their power, or their potential to do us harm.

Melani Lippard: Statue could honor everyone of Civil War era

By Melani Lippard Special to the Salisbury Post It seems that any symbol that acknowledges the Confederacy as anything other... read more