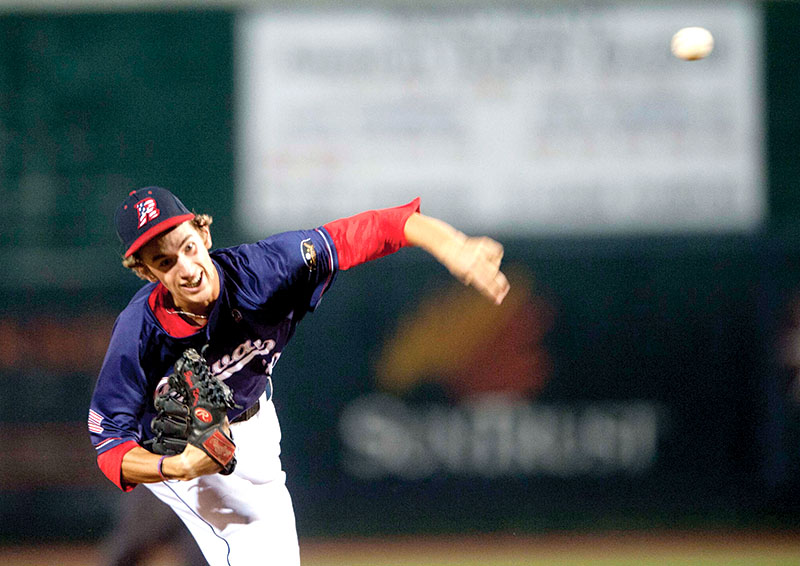 JON C. LAKEY / SALISBURY POST Bryan Ketchie (30) on the mound. Ketchie pitched a seven-inning complete game and got his sixth straight win after giving up just one run on five hits.

SALISBURY — Bryan Ketchie is as consistent as the sunrise these days, and his sensational summer continued on Saturday night at Newman Park.
Ketchie’s ERA dropped from 2.11 to 1.99 and he won his sixth straight decision as Rowan County battered Eastern Randolph 11-1 in seven innings to stay in the winner’s bracket in the state tournament. Ketchie struck out four and walked none. The smooth lefty threw fewer than 80 pitches.
“Ketchie can pitch,” Rowan County coach Jim Gantt said. “He didn’t need his curveball — just fastballs and changeups.”
It appeared Ketchie might be in trouble in the top of the fourth when Bryson Beck, Easton Jones and D.J. Laxton lashed consecutive line-drive hits that cut Rowan County’s lead to 2-1.
But Ketchie is unflappable.
“Ketchie made three bad pitches, got the ball up to three straight hitters, and Eastern Randolph’s hitters didn’t miss them,” Gantt said. “But our catcher (Dustin Ritchie) goes to the mound, gives Ketchie a break and changes momentum. And then Ketchie goes back to work and gets out of the inning. I never even had to leave the dugout. The players did everything, and when the players are doing everything, that’s when you know you’ve got something special going on.”
Rowan County (28-6) has enough special things going on that it’s won back-to-back state tourney games by the 10-run rule.
“We’re just playing well,” Ketchie said. “The offense scored a lot of runs to help me out and our defense was good like it usually is.”
Rowan County had 12 hits, including five doubles. Hunter Shepherd had three hits. Michael Caldwell, Heath Mitchem and Kacey Otto had two apiece.
Jeremy Simpson made several acrobatic plays at shortstop, Harrison Baucom made a running, juggling catch in right field, and Riley Myers contributed a diving snag in left field.
Rowan pecked away with single runs in the second, third and fourth against Eastern Randolph’s tough starter Josh Hudson, who will pitch for Davidson, but it was Rowan’s six-run snowball in the sixth — against Hudson and two relievers — that proved a backbreaker.
“We brought in a guy (J.T. Moore) for Hudson who’s really flourished in that relief role, but it just didn’t work out today,” Eastern Randolph coach Jerry Kidd said. “That inning ballooned on us.”
The big inning started with walks to Myers and Mitchem. Ritchie had hit into a double play earlier, so Gantt called on him to bunt and he executed a perfect sacrifice. When Myers was out at the plate trying to score on what would’ve been a wild pitch for the second out, momentum tilted briefly toward Eastern Randolph (26-12), but then Rowan suddenly produced six two-out runs. Hunter Shepherd’s clutch hit made it 4-1, and after Otto’s second hit and a walk to Simpson kept the inning alive, leadoff man Baucom’s two-run double, a stinging shot to right-center on a high and away fastball, broke open the game.
“I was 0-for-3, but that’s baseball,” Baucom said. “I was just looking to do my job. I didn’t try to to too much, and I just shot that outside pitch to the opposite field.”
Ketchie retired 11 of the last 12 hitters he faced.
“Rowan’s pitcher wasn’t walking anybody and their defense was good,” Kidd said. “When they’re not giving you anything that means you’ve gotta get hits, and we didn’t get enough.”
Eastern Randolph, a good-hitting team that had handed Rowan its only regular-season league loss (by a 10-9 score), only managed five hits against Ketchie.
“Ketchie’s been a workhorse all summer,” Ritchie said. “They hit balls hard early, but then he settled in and hit every spot. The umpire gave us a little bit off the plate, and we took advantage of it.”
Rowan got its final two runs in the seventh on doubles by Mitchem and Shepherd and a game-ending balk. Rowan has won eight straight at Newman Park since losing to Eastern Randolph in late June.
“It was good to beat them,” Ketchie said. “It was a little revenge.”
Rowan County and Hope Mills are the only unbeaten teams in the tournament and square off at 7:30 p.m. on Sunday. Shepherd, a lefty, will pitch for Rowan. Eastern Randolph plays an elimination game Sunday against Caldwell County at 4:30 p.m.