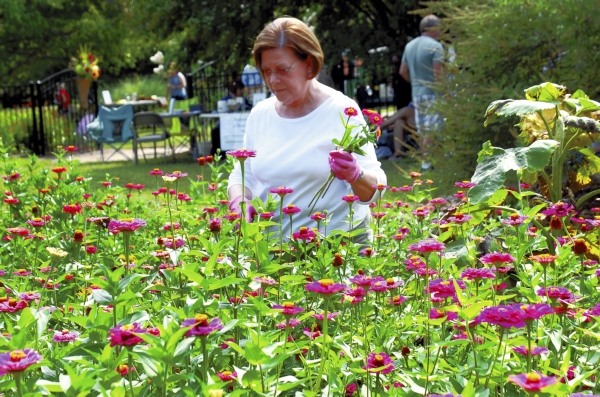 SPENCER — As Patty Crocker emerged Saturday morning from Jean McCoy’s slice of heaven off Steeplechase Trail, she carried a bucket full of cut flowers that promised to brighten up her home for days to come.

Crocker had zinnias, hydrangeas and sunflowers, to name only a few.

“I have always seen this, but I don’t know what it is,” she said of a pretty red flower.

Her friend Carol Bachl weighed in that it was cockscomb, and it did look like the red comb of a rooster.

For Crocker and Bachl, Saturday morning’s “Coffee and Cutting” fundraiser for the Humane Society of Rowan County was the first time they had ever visited McCoy’s expansive flower garden.

For lack of a better description, it’s an awe-inspiring place — acreage worthy of a park, down to its paths, benches and sculptures.

If you were wondering where all the butterflies, bees and hummingbirds were this summer, they’ve all gone to the garden of Jean McCoy.

McCoy said she and her husband, Rick Travis, moved here 19 years ago. The land had been part of a farm, and at first, Jean complained about the lack of trees. But she quickly changed her tune and said, “Oh, good, we don’t have many trees.”

It gave her room for giant flower beds, which were all right with Rick because it cut back on the land he had to mow. McCoy said her flower beds’ soil is rich, thanks to cow manure and other organic fertilizers, and though the couple’s home is on city water, they sunk a separate well for the garden.

Every year, for the past 15 years, McCoy has opened up her garden to different non-profit organizations. People are invited to come and cut any flowers they want in exchange for donations to those agencies.

McCoy can’t hide her delight in seeing her garden receive all this attention.

“These types of gardens are only what you can aspire to,” said Randy Cox, a master gardener himself.

Visitors were encouraged to bring their own buckets and scissors, and the suggested donations were $10 for a small bucket and $25 for a large bucket. There was a silent auction, too, and though coffee was promoted as the main refreshment, so many of McCoy’s friends brought prepared dishes it looked like a church supper inside the house.

Tommy Saintsing of Lexington said it was a feast.

“There are a lot of men inside eating, drinking and talking,” Saintsing said. “That cherry cake was absolutely wonderful.”

Accompanying Tommy and his wife, Sandye, was their daughter, Shelley Gray of Charlotte. “I was so excited,” Gray said of making the trip to McCoy’s garden Saturday. “I kept waking up in the middle of the night.”

The assortment of flowers in her bucket was so impressive, she wasn’t sure she could make a better arrangement when she got home.

Jane Hartness, president of the Humane Society of Rowan, said having the fundraiser in McCoy’s garden “is a fabulous event for us.”

“And people are having fun — it’s not drudgery at all,” Hartness said. “She (McCoy) has to go at this for months — day and night — to have a garden like this.”

McCoy is a master gardener and teaches a gardening class. She calculates she has at least an acre in flower beds “spread all around,” and she laughed when asked what made her so devoted to her flowers.

“I’d rather be outside in the garden than inside cleaning house,” she said.

Clyde Harriss, who has maybe one of the few flower gardens in Rowan County that can rival McCoy’s, couldn’t stay away from this kind of beauty.

“Any large garden — you’re just out there every day,” he said, recognizing the labor and love McCoy and Travis put into the property.

As with many of the visitors Saturday morning, Heather Palazzo was absorbing a lot of new ideas about kinds of plants, their presentations, how different varieties blend together and what might work in her own garden back home.

Palazzo especially liked a bed of “succulents” near one of the gates. Those were attractive plants that didn’t need a lot of attention in tough North Carolina heat, she said.

“It’s just gorgeous,” Phyllis Moysan of China Grove said. “A friend of mine told me about this. I can’t imagine keeping up with this much yard.”

Moysan figured she would build an arrangement with her flowers, though she wasn’t entirely confident in her skills. She then had a second thought: “It will be beautiful,” Moysan said, “because God made them.”

Stephanie Linn, a Granite Quarry resident, said she is a gardner, but “very novice, compared to all this.” One day, she promised, she’ll have a garden to match McCoy’s.

“Now if I could just figure out how to recreate it” said Linn, who brought her 6-year-old daughter, Renna, with her. They took turns cutting the flowers they wanted, including the one Renna was wearing in her headband.

As McCoy talked with everyone and often identified flowers for them, she held or led around her new dog Peanut, who came from the One Day at a Time rescue about a month ago.

“We’ve never had a small dog like this,” McCoy said.

Through the morning, McCoy and Peanut encouraged people not to overlook the “deer-resistant arrangement” toward the back of the garden.

It was a beautifully presented collection of clay pots made to look like flowers.

“It’s a fun garden,” McCoy said, and she was laughing again.