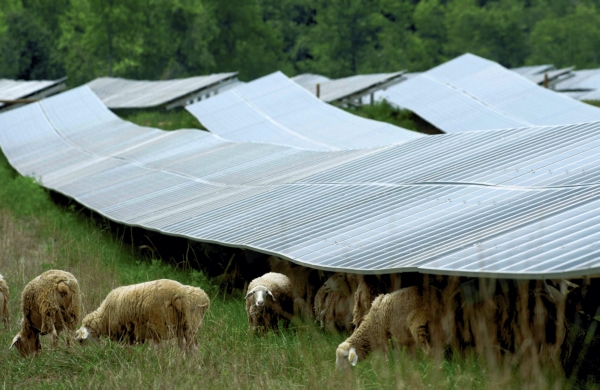 JON C. LAKEY / SALISBURY POST A short tour was given of the complete solar farm project located in Rockwell on Friday afternoon. O2 Energies EMC Inc. operates 22 acres of efficient solar panels that are expected to produce 4.5 mega watts of electricity which is sold to Duke Energy. The solar farm causes no negative environmental impact and in turn uses sheep to mow the fields. Friday, July 24, 2015, in Rockwell, N.C.

ROCKWELL — If you’re looking for sheep and solar panels, N.C. Highway 152 might be a good place to start.

A flock of sheep is the grass maintenance method of choice for a 20-acre solar farm off of N.C. Highway 152 in south Rowan. Signs at the front of the solar farm also indicate donkeys and dogs could be present in the future. The solar farm contains about 19,000 solar panels and generates enough power for about 500 houses or 4.5 megawatts of electricity. O2 Energies EMC, which operates the solar farm and leases the land, showed off its solar facility to visitors Friday after months of construction.

O2 Energies EMC Chief Executive Officer Joel Olsen guided guests through the rows of solar panels. He point out that, unlike other forms of generating energy, the only noise was a slightly audible hum.

“You won’t hear anything, you won’t smell anything and there’s no waste,” Olsen said about energy generation from the solar panels.

The sheep, however, left a few surprises on the ground between the panels, which rise just high enough off the ground to allow for sheep to seek shelter or graze underneath.

With the sheep, Olsen said the solar farm serves a dual purpose. It proves that solar farms don’t just take up space, he said.

“There is so much potential for the industry to grow, but there are some incumbent forces against us, so it’s important that we continue to spread the good word,” he said.

The solar farm constantly generates electricity and pumps it onto power lines owned by Duke Energy.

Traditionally, Olsen said, solar panel arrays use one, central inverter to put power on the grid. At the Rockwell site, O2 Energies EMC used a less centralized method of conversion that allows for greater power output, he said.

Olsen repeatedly called the solar farm a win-win situation for county government, power consumers and the earth. As the solar farm generates electricity, it requires no utilities or county services. The solar farm is also environmentally friendly, he said.

When O2 Energies EMC leaves the property and packs up the solar farm, the land could be used for virtually any purpose, Olsen said.

Before, becoming the home of thousands of solar panels, the land was vacant. It was dotted by shrubs and trees.

“At any point, it can be returned to its original state,” Olsen said. “This gives rural America a chance to reclaim some of its economic footing.”

Gary Weant, the property owner, said he intentionally chose to make the land a solar farm because of its sustainable nature.

“Before now, the land was just holding the world together,” Weant joked. “If at any point in the future it’s no longer a solar farm, it can be used to grow crops or any purpose.”

The solar panels could stay on Weant’s land and generate energy at the same level for at least 25 years, according to Olsen. Even at 30 years, he said the panels could generate above 90 percent of their maximum capacity.

O2 Energies EMC is based in Cornelius and solely focused on generating electricity with solar power. The company is currently building a much larger solar farm — 20 megawatts —  in Montgomery County.

Perhaps we should dedicate July 20 to July 24 to government transparency. Two of North Carolina’s expected candidates for governor in... read more