Melani Lippard: Statue could honor everyone of Civil War era 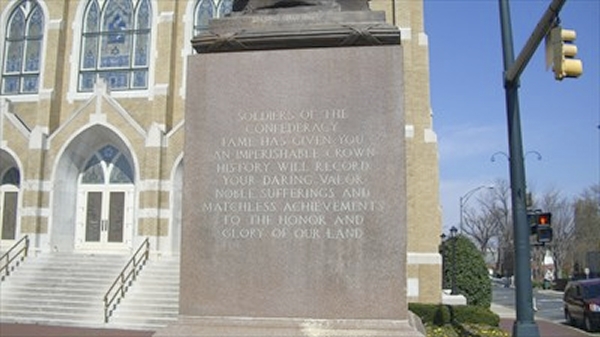 One side of the Salisbury Confederate Monument's base.

It seems that any symbol that acknowledges the Confederacy as anything other than slave holders is to be condemned.

I have heard the word “intolerance” flying around like dust in a drought anytime there is any controversy or dissent over progressive ideas. “Disagreement” does not equal “intolerance,” just as “misunderstanding” does not equal “ignorance.” If a person is looking for something to be angry about, they will find it. If a person is looking for disparities between one race and another, they will find it.

Focusing on the negatives and differences is easy, and the reward temporary and bitter. Finding the positive in a situation takes more effort, but the result is growth towards a more perfect union between those differences. A wise man once said “Darkness cannot drive out darkness; only light can do that. Hate cannot drive out hate; only love can do that.”

Which brings me back to the Confederate memorial in Salisbury, the statue simply called “Fame” representing a terrible stain on our country’s past. To call for the removal of “Fame” because it represents slavery and dishonor of the American spirit is telling every person whose forefathers fought for the Confederacy that they should be ashamed of their predecessors. It says those who descended from these war-torn families should now be ashamed that their ancestors fought to protect their families.

The engravings on the pedestal hold much of the Salisbury legacy in poetic prose: “Soldiers of The Confederacy, Fame has given you an imperishable crown, History will record your daring valor, noble sufferings, and matchless achievements to the honor and glory of our land.”

While dedicated to all Confederates who fought in the Civil War, this statue could easily have been dedicated to the citizens of Salisbury, for it was the daring valor, noble suffering and matchless achievements of the people that allowed for them to emerge from the tumultuous years of the Civil War stronger through self sacrifice and shared understanding, giving their descendants pride to carry on through the difficult years ahead.