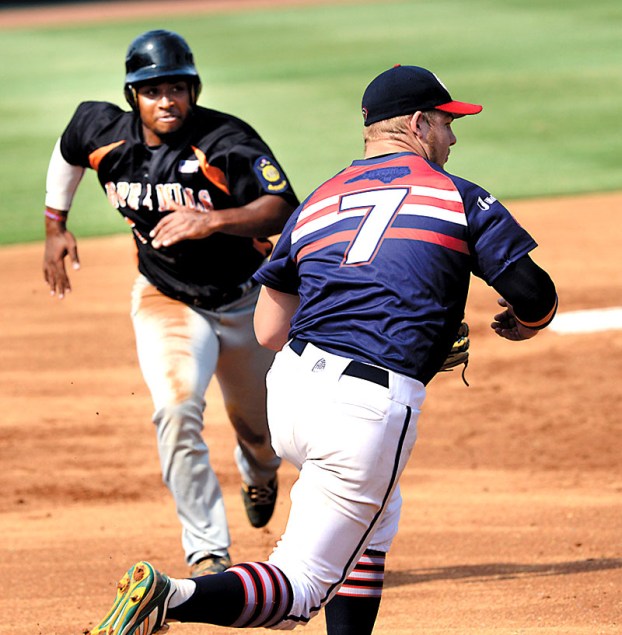 photo by Wayne Hinshaw / for the Salisbury Post Hope Mills’ Howard Smith (35) advancing to third base with High Point’s Zach McLean (7) at third.

The result was a 6-5 state tournament victory for Post 29 Saturday afternoon at Newman Park, one that moved the Area II champion one huge step closer to its first title. The Boosters are back on the field at 7:30 p.m. Sunday against Rowan County, the winners of the Area III regular-season and tournament titles.

“We’re playing on Sunday with no losses,” coach Mark Kahlenberg said after Hope Mills (23-5) earned a berth in the next round of the double-elimination tournament. “I like our chances.”

The game featured an edge-of-your-seat finish when High Point (26-9) put two runners on base with two outs in the bottom of the ninth inning. Reliever Austin Warren procured the final out when he induced slugger Zach McLean to line out to shortstop Gatlin Pate.

“I knew I couldn’t leave one over the plate or inside for him,” Warren said after notching his fifth save. “He’s got great power.”

McLean, High Point’s python-armed third-baseman, demonstrated as much when he launched his second home run of the tourney — and 16th of the season — on a 3-2 pitch from unbeaten left-hander Justin Walke in the last of the third. It produced three runs and tied the score 3-3.

“When Zach hit that, it was huge,” said Post 87 coach Rob Shore. “A lot of home runs this year have come in clutch spots.”

“We’ve given up 13 runs in the last two days,” he said. “I would say half of those were unearned. Our defense has been outstanding all year, but we’ve made about 20 errors in our last four games.”

Hope Mills took a 1-0 first-inning lead when Trey Jacobs chopped a run-scoring bouncer into right field. An inning later it was 3-0, courtesy of Pate’s single into left and the first of High Point’s miscues. The HiToms tied the game with one swing of McLean’s bat, before Post 29 regained the lead on a fifth-inning home run by Logan Hales. The left-fielder added a ninth-inning single, giving him six hits in the tournament.

In the Hope Mills sixth, Howard Smith (3-for-4, two runs scored) grounded a sharp single to left and scored on an outfield error. Jacobs paddled a run-scoring hit with two away to make it 6-3. High Point plated its final runs when Corey Brandenburg scorched a two-run triple to center in the last of the sixth.

Warren relieved and retired High Point in order in the eighth before walking two batters in the ninth — one of whom he believed he picked off.

“After I walked (Brandenburg) leading off, I’m sure I had him,” Warren said. “But the umpire hadn’t called ‘Play Ball’ yet. So that ticked me off.”

He responded by by escaping unharmed when McLean lined out on a 1-2 curveball off the plate.

“My heart is still beating,” Kahlenberg said moments later. “It came down to our best relief pitcher against their best hitter.”