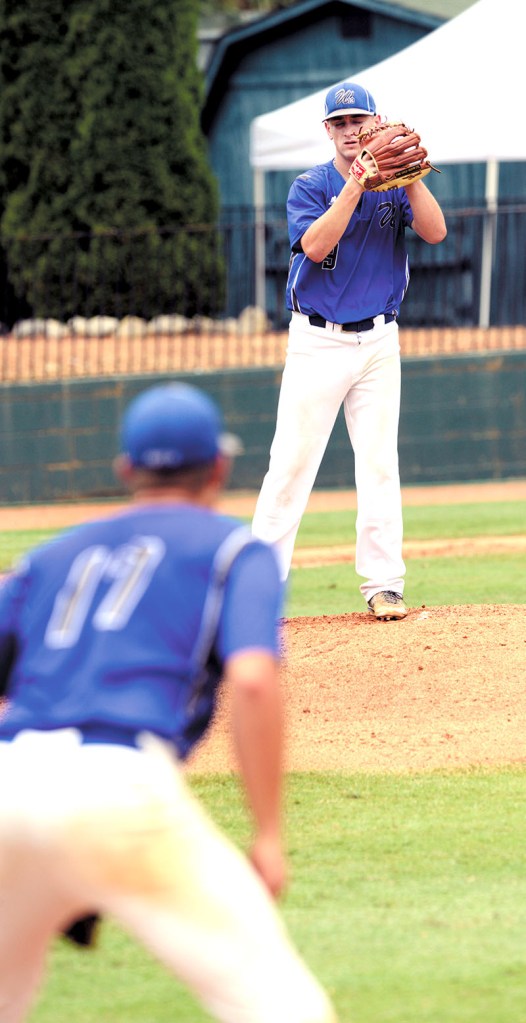 Photo by Wayne Hinshaw / for the Salisbury Post Wilson pitcher Blake Helms (9) looks to first base.

SALISBURY — Wilson Post 13 stayed alive in the American Legion state tournament thanks to solid pitching by Blake Helms and an outstanding day at the plate by Dwanya Williams-Sutton. Helms allowed just one run while going the distance against Haywood County while Williams-Sutton blasted a solo home run, one of four runs he scored Saturday.

Wilson, the No. 2 seed fro Area I, easily defeated Haywood County 8-1 to stave off elimination from the American Legion baseball state championship. Haywood County was the second team sent home from the the eight-team, double-elimination tournament.

Helms never got into a jam throughout the whole game. Haywood’s only run came in the bottom of the fourth when Nathan Summey laid down a nice sacrifice bunt on a suicide squeeze to cut Wilson’s lead to 4-1.

The recent Rocky Mount graduate faced four batters over the minimum in the final five innings. He got the win after striking out five, walking two and allowing seven hits.

Wilson head coach Rusty Dale said this was the second or third time this season Helms pitched a complete game and the team has “all the confidence in the world in him.”

“I was very comfortable out there,” Helms said. “…I’m used to pitching a lot of innings. I love it. (Dale) always asks me after the sixth inning how I feel. It’s kind of my decision, and I felt fine.”

Williams-Sutton answered that Haywood County run in the top of the fifth with a solo blast over the scoreboard in left field that easily made its way into the trees. The East Carolina signee went 2-for-3 with a pair of walks. The only mistake he made came in the top of the ninth when he was picked off at first base.

“We got two or three game changers that can affect how we play,” Dale said. “If they play well, we play well. …I think we got that deer-out-of-the-headlights syndrome out of us last night.”

Wilson shut the door on Haywood County, the top seed from Area IV, in the top of the seventh. Back-to-back errors put Williams-Sutton and Mobley on first and second with two outs. Brickhouse’s RBI single and Daniels’ two-RBI double off the cinderblocks in left field made it an 8-1 ball game.

Wilson plays the loser of the Hope Mills vs. High Point game at 4:30 p.m. Sunday at Newman Park.