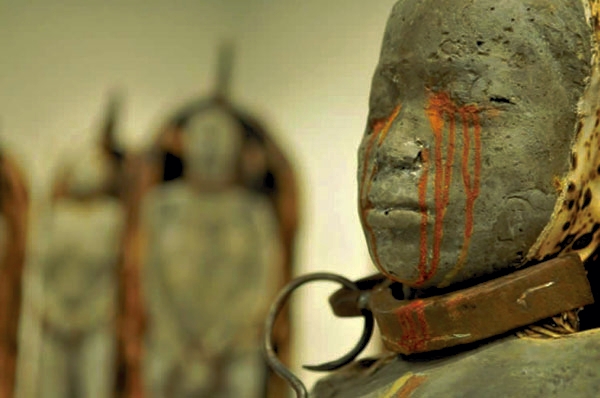 A young slave appears to weep in Stephen Hayes' exhibit, 'Cash Crop,' shown at Waterworks in 2015.

I’m taking some liberties but suppose with me for a moment, just for the sake of perspective.

Suppose you are a young boy in Africa during the Atlantic slave trade era, and as a member of a small village, you learn the importance of each member’s responsibilities.

Suppose one day while playing in the river where your mother is doing her daily chores, you see strangers treating the adult male members of your village cruelly and taking them away, never to be seen again.

Suppose your own father and two older brothers are among those shackled.

Not only is this a very sad time for your family and village, but everyone is concerned how the village could survive with most of the hunters now gone.

As you grow older you wonder, sometimes aloud, why anyone would treat fellow human beings so harshly.

The next several years are very difficult. Hunger has become a fact of life, and some older members of the village die of starvation.

Yet, your mother never let you worry or be idle. She encourages you to learn to hunt, and slowly living conditions improve.

Then suppose 10 years after the first raid, the strangers come again, and this time you  and your two sisters are taken captive. Your mother and a few other older women are left behind as well as several babies. One of the babies left behind is your sister’s child.

Before, you were too young to grieve the loss of your father and brothers, but you are older now, and seeing your mother on her knees, crying, is heart breaking. Who will care for her? Who will hunt for her?

The uncertainty of your future is of little concern. It is what you leave behind that troubles you.

After many days in the cramped filth of a creaking, leaky vessel, you arrive at your destination. Strange people with pale complexions examine you all, one by one, muttering to themselves in an unknown tongue. Soon you find yourself, still shackled, in the back of a horse-drawn wagon, traveling — somewhere.

The happiness of the first 15 years of your life pales in comparison to the two horrendous events that devastated your village and family. The question remained. Why would anyone treat fellow human beings so harshly?

Adjustments to the customs, language, and new responsibilities come slowly.

The question of why this happened is answered for you, but not satisfactorily. You will never accept laws that permit a complete disregard for another’s basic human rights.

The most perplexing thing to you are monuments erected in honor of those who you see as the ones who enforced the laws that encouraged the destruction of another’s life and happiness.

More questions come. Why didn’t the gallant general on his magnificent horse lead his army to rescue my father and brothers as they were torn away from their family? Did an angel come to gently hold my mother and comfort her in the hour of her greatest need?

Then, I smile as I already knew the answer to the last question.

The last thing I saw my mother do — and I will carry this memory of her forever. She leaned over and picked up her granddaughter and gently cradled her in her arms.

My mother was my niece’s angel. Her wings may not have been visible but they were there. She’ll find a way.

I was wondering. Could our community focus on the loving, compassionate qualities of Fame?

Perhaps we could work together to create an annual “Fame’s Wings” award and select those who selflessly serve those in need?