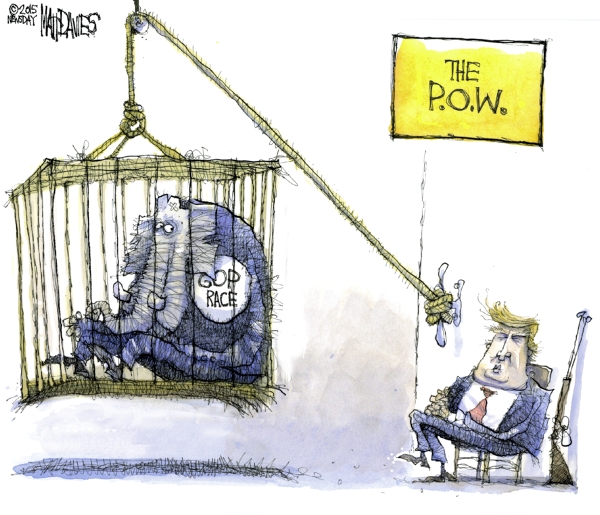 In an effort to build a legacy and boost his re-election chances, Governor McCrory has brought on many constituencies to slop up to the public trough to shill for a $3 billion bond referendum. But why the break-neck hurry? The real test of McCrory’s leadership would be putting that referendum before the voters in 2016, when there is a 65 percent turnout and his own re-election bid is up for a vote. Now that would be an exercise in courageous leadership!

We know from the Muslim terrorist attack in Chattanooga, which has already been pretty much forgotten in the media, that had a Muslim committed the Charleston shooting, there would have been no “conversation” about anything confederate right now. Amazing how the left can be swayed so easily by the press, and react as they’ve been instructed to react.

These debates should remain local. Anyone who gets warm fuzzies from the GA taking control from our local officials will regret that when the tables turn in the next debate.

I took a long hard look at the soldier on the Confederate Memorial. The phrase “Rich man’s war, poor man’s fight’ came to mind. Victims of the peculiar institution of slavery knew no racial boundaries. The Civil War was all about economics and the maintenance of a privileged few. The fear of journeymen farmers losing land to the Yankees was a ruse to get them to work against their best interests and separate potential allies. Fame is one memorial that should stand and honor those who sacrificed their lives for their homes and convictions in spite of the fact that they unwittingly laid down their lives for slavery.

Gloria Victis is not honoring an American soldier, it honors a Confederate soldier, a soldier who was fighting for the right to keep people enslaved and who was taking up arms against the United States.

Having a discussion around whether or not that is appropriate isn’t at all the same as gray- haired hippies taking sledgehammers to the Vietnam memorial. Not only are they not the same thing, those ideas aren’t even in the same ballpark. Being anti-war and thinking that just maybe we shouldn’t have statues honoring slaving rebels that took up arms against the country are miles apart. …

I had two ancestors who fought in the Civil War. Neither of them were slave owners. They were poor dirt farmers who were convinced that if they didn’t fight, the Yankees were going to come and take their land. Whether this was true or not, it was their perception – and personal perceptions are reality! I have read letters of many of these types of men who chose to fight for the Confederacy. They were not fighting to keep people enslaved – they were fighting for their own existence – or at least that was their belief.

First of all, the Confederate soldier was an American soldier, a soldier of the Confederate States of America. Both Union and Confederate citizens were American soldiers. Secondly, slavery WAS NOT the main and only reasons for dividing the American homeland. My Great-Great Grandfather was not a slave holder, yet he left his wife and children back in Rowan County to fight for the CSA, only to die from disease in a New York Union POW camp, just months before the war’s end. FAME honors ALL (Union and Confederate) American soldiers for their sacrifices. Were all CSA soldiers “slaving rebels”? Least not forget, there were slaving Yankees and slaving people of color. You are just like the newsman who said it happened, he was there.

OK, let me get this right. This legislature wants to weaken urban (and more liberal voting) areas by rerouting sales tax money to rural areas. (Why, oh, why did McCrory call that a liberal endeavor?) Now, they want to weaken municipalities by taking away their ability to have strong downtowns. North Carolina, they’re just not that into you.

I agree with the premise of the legislation: There should be a way by which the voters can get rid of service districts, should they so choose (it should be stringent: 25% petition, 60-75% at ballot). I also agree with Warren that it should go through the proper channels. That said, if I lived there I would not sign or support a petition to get rid of Downtown Salisbury, Inc. They seem to do a good job but I can not be self-righteous and try to speak for any of the other places with these districts across our state because I do not live there.

The story might have mentioned that Diane Young — Salisbury resident and downtown property owner and director of the Concord Downtown Development Corporation — … testified before the N.C. House Appropriations, Agriculture and Natural and Economic Resources Committee last week, in an effort to persuade policy makers to reject the MSD provision by illustrating what a mess this could make.

One (of many) examples: as written, downtown apartment residents (non MSD tax paying property owners) could vote to eliminate the MSD tax, while the tax paying property owner might have no say in the matter at all, because he lives outside the downtown district. Many MSDs have sunset clauses. All can be voted in or out at any time which makes this provision needless.

This is an example of why elections are important. These folks are trying to do what we elected them to do. Locally, I have a renewed sense of optimism. Nationally, not so much. We need some fresh faces with fresh ideas there as well.

… Conservatives should not run from Trump

It seems to me that Trump says out loud what most Conservatives say in private, and that transparency makes them nervous. Sanders is doing the same thing to Liberals. It’s nice to hear unfiltered philosophy for a change. We normally only get that from Libertarians.