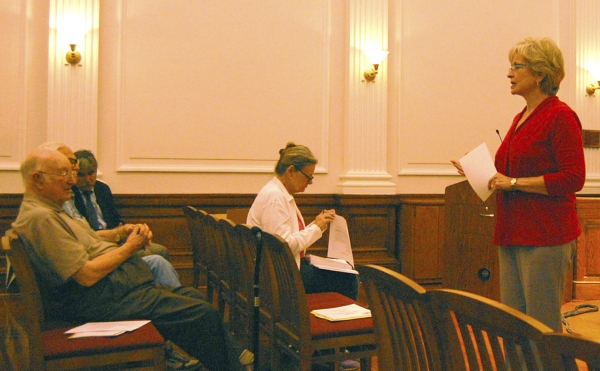 “I always do my best to speak to any groups that want to hear about public education,” Atkinson said, adding, “public education is critical to all North Carolinians.”

Atkinson said that everyone is an expert on education.

“We all can go back to our own experiences,” she said, but added that few people understand the finances that go into running the state’s schools.

Under the state Constitution, the General Assembly is responsible for making sure there is “adequate funding for public education,” Atkinson said.

“It is the responsibility of the state – the general assembly – to provide money,” she added.

“There are three buckets of money for public education in North Carolina,” she said. “The biggest bucket is from the General Assembly.”

“That seems like a lot of money until you break it down per student,” she said.

Although North Carolina has spent more money on public education recently than in the past, they actually spent less per student.

Atkinson said it’s hard to pinpoint exactly how much money is allotted to each student.

“How much per student depends on the student,” she said, adding that students that are low-income or classified as Exceptional Children receive more funding than others.

Atkinson went on to explain how the money received by the state is categorized.