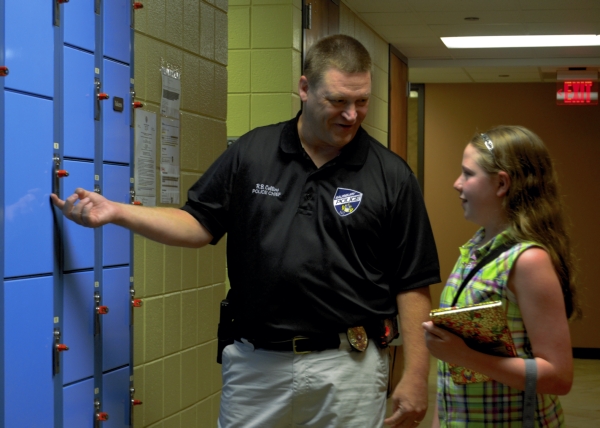 Claire Allen, a rising eighth-grader at Sacred Heart Catholic School, spent her Wednesday with Salisbury Police Chief Rory Collins. Her mother won the chance to have a Day With the Chief, at a school auction. Above, Claire learns about evidence collection and the lockers that contain the items. Shavonne Walker/Salisbury Post

“And this is where we store evidence,” Salisbury Police Chief Rory Collins says, as he turns to Claire Allen, a rising eighth-grader at Sacred Heart Catholic School.

The 12-year-old shadowed Collins for the day after her mother won the opportunity during a fundraising event — Denim, Diamonds and Dazzle — at the school.

She spent a day with the chief, toured the police department, met K-9 Jack and his handler officer Joseph Martinez, and even learned how to “lift” fingerprints from Crime Scene Investigator Victoria Young.

“I think it’s cool,” Claire said of her opportunity.

Collins said he was thrilled to be able to offer Claire an inside look at the police department.

“I have a particular passion for working with young people,” he said.

“My own testimony is I know the benefits of having been mentored,” Collins added.

He said he was open to having a positive impact on any young person. He said it was a chance to explain to Claire about the challenges law enforcement face and their everyday routines.

Collins said he was very “impressed with Claire,” whom he found highly intelligent and articulate.

Claire said she already had a grasp of some of what officers did and knew they did “more than fighting crimes.”

Although law enforcement may not be her career of choice, Claire said she enjoyed her time and believes she wants to be a writer.