Animal Shelter running out of space in summer months 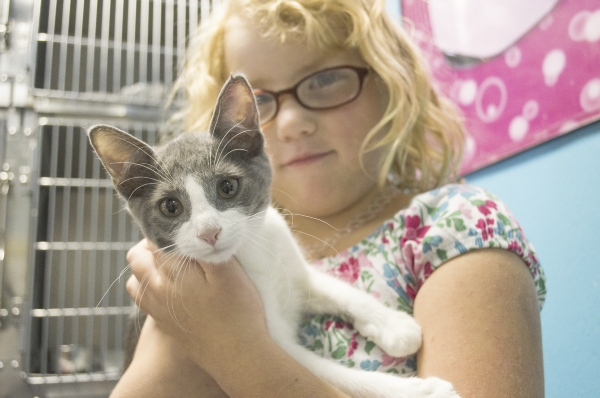 Josh Bergeron/Salisbury Post Six-year-old Isabella Bruce holds a cat on Thursday at the Rowan County Animal Shelter. The shelter is seeing an influx of animals this summer, which leads to more euthanizations being scheduled.

Animal intake numbers at the Rowan County Animal Shelter typically spike sharply during summer months, and 2015 is no exception.

The Rowan County Animal Shelter is bursting at its seams. Four cats were euthanized on Thursday. Today, three dogs and 10 cats are scheduled to be euthanized, according to numbers provided by shelter staff on Thursday afternoon.

The numbers are a slight departure from the shelter’s recent history. June 2015 marked the second best month ever in adoptions — 369 — for the animal shelter. And, the shelter’s adoption rates, month after month, rank as one of the best in North Carolina regardless of size. Many of the top five months for adoptions also occurred in the previous year. The numbers, however, are consistently propped up by efforts from rescue groups, who often rush to adopt animals on their last day.

“A lot of these guys will end up being farm cats, but at least they’ll be alive,” said Jennifer Frasier, who helps run Purfect Purbaby Rescue.

By the time the shelter closed Thursday, the numbers were sharply lowered.

Rowan County Animal Shelter statistics show cats are more frequently euthanized than dogs, and animal advocates note the shelter hasn’t — technically — euthanized an adoptable dog since October 2014. The shelter has, however, euthanized sick animals and those who bite humans. One dog who was only eligible to be adopted by a rescue group has also been euthanized since October.

As the shelter enjoys improved adoption numbers, however, rescue groups are beginning to experience overcrowding in their own facilities.

If rescue groups aren’t adopting animals to be sent to other cities or states, they are most commonly placed in boarding facilities or “foster homes.”

Some rescue groups are housing up to 70 or 80 animals in boarding facilities, said animal advocate Connie Ray.

“Some of them are just unable to take any more,” Ray said.

Because of the previous, top-notch rates, Rowan residents may be more apt to bring their animal to the shelter when he or she can’t take care of it anymore.

“It’s wonderful that the numbers are down, but I think it gives people a false truth that none get euthanized,” she said.

If the shelter continues on its current trend, July could turn out to be another one of the top months in the facility’s history. However, in July 2014, 180 total animals — 38 dogs and 137 cats — were euthanized.

Once the shelter’s cat wing, currently under construction, opens, the facility will have more space for cats. Dogs will also gain more space once cats move out.

On Thursday, several dog holding pens were rumored to be closed due to construction, which could have added to overcrowding. County Manager Aaron Church said some pens were closed for a short time, but were quickly reopened.