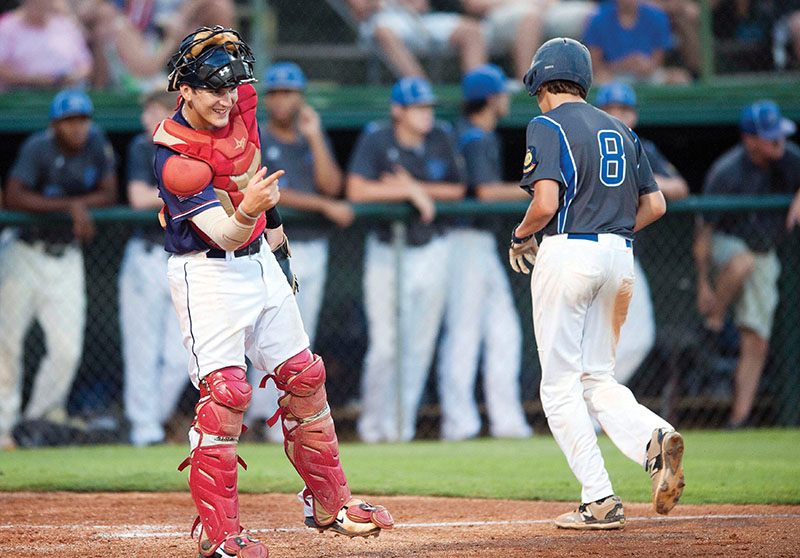 SALISBURY — With two on and no outs in the fourth inning, Wilson’s Luke Taylor rapped a ball up the middle that appeared to be a certain base hit.
Had that ball gotten through, it might’ve created momentum for Wilson, but it didn’t get through. What happened was described by various players as the play of the summer, the year and the century.
Rowan County second baseman Michael Caldwell smothered that ball with an all-out dive and flipped the ball to shortstop Jeremy Simpson, covering second base, for an out. Then Simpson’s relay to first baseman Hunter Shepherd was just in time for a double play.
That diving stop was the highlight of Rowan County’s 12-2 win on Friday night against Wilson Post 13 in the first round of the state tournament. It was a mostly ugly game, marred by 13 walks and seven errors, but it will be remembered for one beautiful play.
“When I got to the dugout coach (Jim) Gantt told me he was looking in the outfield for that ball, and he couldn’t believe that I got to it,” Caldwell said. “(Rowan pitcher) Omar Bautista got this amazing expression on his face and jumped about 10 feet in the feet in the air when we turned the double play.”
Bautista (4-1) pitched into the sixth inning of the seven-inning, 10-run rule game. A double play started by third baseman Juan Garcia, who went a long way to his left, helped out Bautista in the second inning, and Bautista shut out a powerful offensive club with two East Carolina signees until the fifth. By then, Rowan County (26-6) was in command 7-0.
“Omar hadn’t pitched in a while, didn’t have his best command and was all over the place,” Gantt said. “But this game was a testament to how good Omar is. He was still able to get groundballs when he needed groundballs and double plays have been a big part of things for us all summer.”
Dustin Ritchie’s RBI single — following two walks and an error — gave Rowan a 1-0 lead in the first.
Rowan County’s decisive, six-run second included run-scoring singles by Harrison Baucom and Caldwell, a double by Juan Garcia and a two-run double to the right-center gap by Heath Mitchem.
“We can hit, and we’ve got a good team, but we looked like a deer in the headlights,” Wilson coach Rusty Dail said. “I don’t know if it was the big crowd or what, but we hadn’t played a game as bad as this all year. We picked a really bad time to play bad against one of the best teams in the tournament. You need to play mistake-free against Rowan.”
Wilson (20-5) showed life in the fifth when Hunter Lee’s bunt single and doubles by Jarratt Mobley and Spencer Brickhouse produced two runs, but Simpson’s triple — his first of the season — helped Rowan get those two runs right back in the bottom half of the fifth.
“We came out swinging and we got in good counts and got good pitches to hit,” Simpson said. “We got to their bullpen very early (in the second inning).”
Caldwell’s third RBI of the night capped a three-run sixth that pushed Rowan’s lead to 12-2. Rowan reliever John Owen finished the game off. Fittingly, it ended with yet another Caldwell-to-Simpson-to-Shepherd double play.
“We had some nerves early and the first ball I threw tonight didn’t come out my hand the way I wanted it to,” said Simpson, who committed one of four Rowan errors. “But we made plays. The play Michael made on the dive was the play of the game. It was a major-league play.”
Rowan County plays Eastern Randolph at 7:30 p.m. on Saturday. Wilson will play an elimination game against Haywood County at 12:30 p.m.