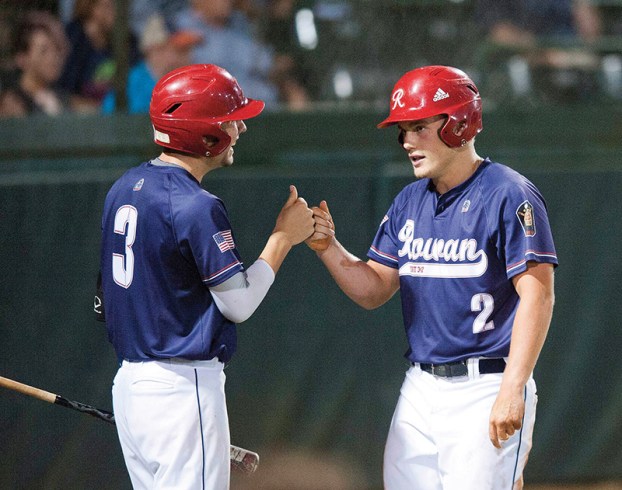 FILE PHOTO BY JON C. LAKEY / SALISBURY POST Rowan County’s Riley Myers (2) safe at home is welcomed by Jeremy Simpson (3) against Mocksville-Davie on July 8 in the second round of the Area III Tournament.

SALISBURY — Shortly after the 1955 Salisbury American Legion team returned from a third-place Little World Series finish in Minnesota, the teenage heroes played a charity game against a hastily assembled all-star squad of local adults.
To the amazement of fans, the Legion team got clobbered, a humbling experience the players still remember 60 years later.
“We thought we were hot stuff and then we got killed,” center fielder Alvin Smith said. “That brought us back down to Earth pretty quick.”
The moral of the story is nothing can be taken for granted in baseball, and you’re only as good as your last game.
With solid pitching, steady hitting and exceptional defense, Rowan County (25-6) has played winning baseball this summer. Rowan County is 23-2 since the June 4 game at Southern Rowan where Bryan Ketchie pitched brilliantly and Hunter Shepherd launched a tape-measure homer.
Still, the state tournament is a reboot for all eight teams that will appear at Newman Park, and they’re all restarting from scratch on equal terms.
Rowan County, 8-1 in the postseason, is one of the favorites and could win the double-elimination event that runs through Tuesday, just as it did when it last hosted the state tournament in 2002. But there’s also a chance Rowan could go 0-2. That’s the nature of baseball.
Rowan County takes on Wilson Post 13 at 7 p.m. Friday. It’s an unusual first-round matchup to say the least. Wilson (20-4) has lost fewer games than anyone in the field.
Wilson and Garner (16-11) were declared co-champs of Area I rather than playing a championship series.
Wilson lost the ensuing coin flip with Garner, so it is seeded as the No. 2 team from Area I despite its superior record.
“We won our area championship, so we’re supposed to play a No. 2 seed,” Rowan County coach Jim Gantt said. “But Wilson’s not a typical No. 2. They might be as good as anyone here.”
Rowan vs. Wilson should give fans an entertaining game to finish off the first day, and it should draw a huge crowd.
“We had a lot of people out here for the Randolph County and High Point games,” Rowan catcher Dustin Ritchie said. “When we play in the state tournament, there may not be room for everybody.”
The biggest question mark for Rowan most of the summer was pitching depth behind Ketchie (5-0, two saves, 2.11 ERA), Riley Myers (5-0, two saves, 3.29 ERA), Shepherd (5-1, 2.59 ERA) and Omar Bautista (3-1, 2.04 ERA). But in the brief Area III championship series with High Point, Rowan got a winning start from Tyler Scruggs and a start from Noah Jarrett that put Rowan in position to win. Gantt also got good relief work against High Point from Sawyer Strickland, John Owen and Alec Hamilton.
Offensive leaders have been third baseman Juan Garcia (.442, 40 RBIs, 13 doubles), right fielder Harrison Baucom (.374, 34 runs, 25 RBIs, 15 steals), designated hitter Heath Mitchem (.450, .551 on-base percentage, 26 RBIs), left fielder Myers (.378, 31 RBIs) and first baseman Shepherd (.351, 23 RBIs).
Shortstop Jeremy Simpson (.309), second baseman Michael Caldwell (.322), catcher Dustin Ritchie (.333) and center fielder Kacey Otto (.282) are up-the-middle guys who anchor the defense.
The versatility of Myers and Garcia has been important for a squad short on position players. When Shepherd pitches, Garcia moves over to first base with Myers taking over at third. Lee Poteat (.304) plays left field when Myers pitches or plays third base.
Rowan takes on a Wilson team with big sticks, including Spencer Brickhouse (.475), Charlie Vaughan (.433) and Jarratt Mobley (.417).
Wilson’s pitching staff boasts impressive numbers. Leaders include Brandon Winstead (4-1, 0.92 ERA, 48 strikeouts in 39 innings), Blake Helms (4-1, 2.72 ERA) and Jeff Hagen (4-2, 2.37 ERA).
As Area I co-champ, Wilson claimed its first area title in 35 years.
Area IV runner-up Caldwell County (27-11) plays Area II champ Hope Mills (21-5) at 9 a.m. to start Friday’s first-round action.
At noon, Area IV champ Haywood County (25-5) plays Area III No. 3 seed Eastern Randolph (25-11), a team that beat Rowan County 10-9 at Newman Park.
At 3 p.m., Garner takes on Area III runner-up High Point (25-8). High Point was shaky defensively in its recent series against Rowan County (11 errors in two games), but it has three outstanding pitchers and a lineup laden with power and experience. High Point was disqualified by an ineligible-player ruling during last summer’s state tournament in Lexington, so it’s also a team on a mission.
“This is our fourth time in the state tournament in five years,” High Point coach Rob Shore said. “We’ve been a consistently good program. Maybe it’s our time to win one.”

SALISBURY — Hunter Shepherd has already participated in one World Series this year, but another appearance on the national stage... read more