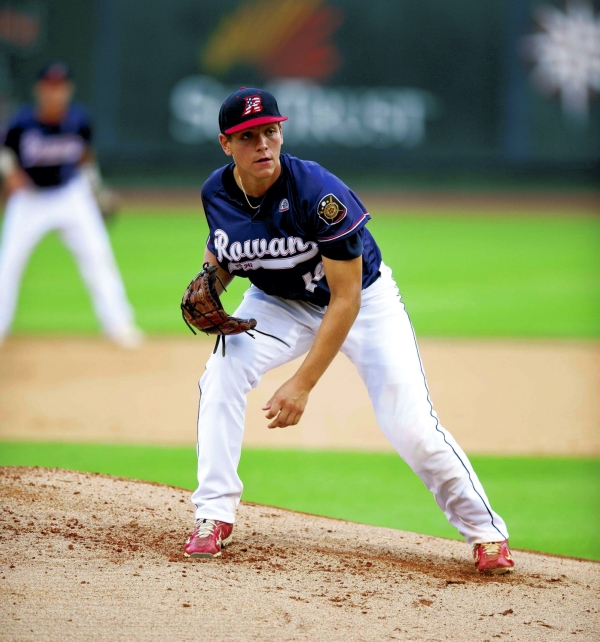 JON C. LAKEY / SALISBURY POST Hunter Shepherd has been a key player as the Rowan County made a run to the Area III regular-season and tournament titles. The 17-year-old rising senior, who is homeschooled, has a .536 batting average, 51 RBIs and a 4-4 record on the mound.

SALISBURY — Hunter Shepherd has already participated in one World Series this year, but another appearance on the national stage this summer would suit him just fine.
Obviously, there is a lot of work yet to do for Shepherd, in his second season with Rowan County, and his American Legion teammates on the eve of their first game in the State American legion tournament beginning Friday at Newman Park. Rowan is the Area III champion with a 25-6 record and is one of eight teams vying for the state title that would lead to a Southeast Regional berth and maybe the American Legion World series in Shelby in August.
“That would be amazing, that would be a dream,” said Shepherd, a talented and versatile first baseman and left handed pitcher for Post 342 this summer.
But he fully realizes getting to the Legion World Series requires taking one step at a time, one game at a time and a lot of hard work.
Shepherd is a key cog in the Rowan Legion machine this summer, but he came to the team through a less-than-conventional route. The 6-foot-3, 215-pound player is 17 years old and a rising senior academically. Along with his siblings, he has been home schooled his entire academic life. His mother, a former public school teacher, has educated her children with a broad-based Christian inspired curriculum.
“I really like it because you can get your work done and still have times for other things,” he said, noting hunting and fishing especially. “My mother is a very good teacher, very hands on, and I can’t thank her enough for what she has done for me.”
Home schooled students often band together for collaborative efforts including athletics and that is how Shepherd has molded himself into an outstanding baseball player that allowed him to play in a world series this past April. Shepherd, along with Rowan Legion pitchers Noah Jarrett and Sawyer Strickland, are long time members of the Greater Cabarrus Stallions home school team coached by Chris Lankford. The Stallions posted a stellar 24-9 record this past spring and advanced to the National Home School World Series in April in Auburndale, Florida.
The Stallions notched a couple of wins in the national event and finished sixth in their division. Shepherd was a star on the team with a .536 batting average and 51 RBIs. He also posted a 4-4 pitching record.
“It was our first world series, and it was really a great experience,” Shepherd said. “There were some really top notch teams down there. We are just trying to get as good as we can be and build on it. Most of us have been playing together since seventh grade.”
It was a natural progression for Shepherd to try out for the Rowan Legion team in the 2014 season. He made the final roster as a left-handed pitcher and a back-up to star first baseman Chance Bowden.
“He was very helpful to me,” Shepherd said of Bowden, now a mainstay for the Catawba Indians. “He taught me a lot, and anything I needed to work on, he helped me out along the way.”
With Bowden now departed, Shepherd has stepped into the void with his defensive skills at first and his power at the plate. In 31 games, Shepherd has posted a .351 batting average with two homers, 23 RBIs and three stolen bases. On the mound, primarily as a starter, he has a turned in a 5-1 record and a 2.59 ERA. He has also made his mark this season with a couple of notable performance benchmarks: a rare complete-game, 90-pitch effort back on June 16 when he beat Mooresville 2-1 in a three hitter; and a legendary two-run homer on June 4 that easily cleared the 390-foot fence at Southern Rowan.
His numbers and defensive skills are outstanding, but Rowan Legion coach Jim Gantt is much more appreciative of the intangibles Shepherd brings to his team.
“He is probably one of the most respectful players I have ever coached at any age,” Gantt said. “And that is something he learned at home. That is why he acts like he does. He has a lot of sense, is not enabled and he comes in here with a great work ethic. Plus he is accountable, which is a quality you don’t find in many teenagers anymore.”
His character, his performance on the field, his size and his left arm has drawn the early attention of a number of college coaches and even professional scouts, but that too is a long way off in his mind.
“I just try to slow everything down and enjoy playing the game,” Shepherd said. “I will just weigh out all my options when the time comes and see where the best situation is for me. I am just trying to enjoy the ride while it lasts.”
Part of continuing the ride is being a member of the high performing Rowan County team that is peaking as the state tournament looms.
“It is an amazing experience, and I will do whatever the team needs me to do,” he said. “It is wonderful to play for coach Gantt and assistants coach (Seth) Graham, coach (Sandy) Moore and coach (Ryan) McClintock. They know the game and have us well prepared for anything that might come up. I love the mental aspects of the game and I will fill whatever role they need me to fill.”