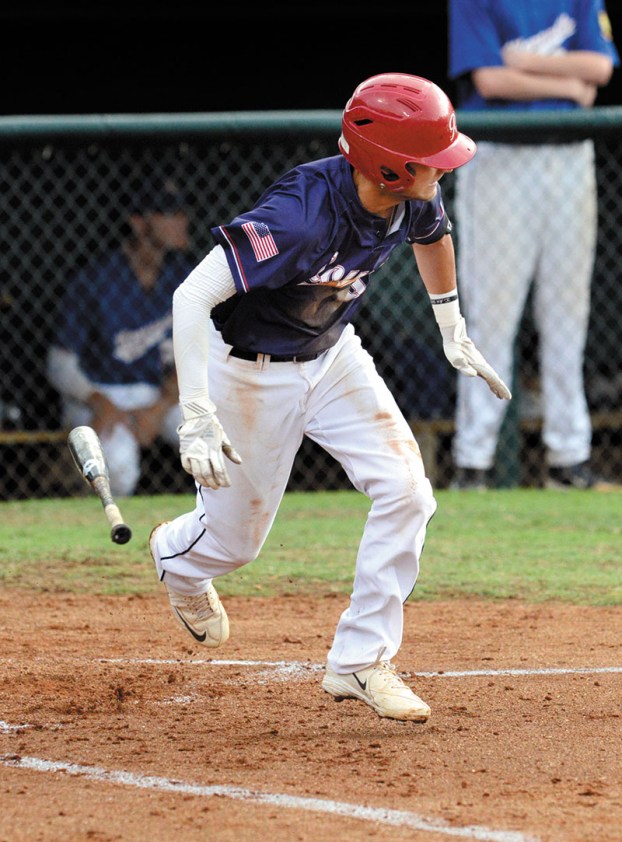 SALISBURY POST FILE PHOTO Michael Caldwell takes off for first base after getting a hit. Caldwell and Dustin Ritchie — a pair of East Rowan graduates — have made big contributions to Rowan County during its run to Area III regular-season and tournament titles. The two played for Pitt Community College in 2015.

SALISBURY — In Rowan County’s Area III championship-clinching win against High Point on Sunday, a Post 87 slugger skied a foul popup down the right-field line.
Rowan County second baseman Michael Caldwell knew right fielder Harrison Baucom was playing deep to prevent a double, and Caldwell recognized he was the only one with a chance to make a play.
Caldwell started screaming, communicating to the charging Baucom and first baseman Hunter Shepherd that he had things under control.
“That play is the only play where you want the infielder to call off the outfielder,” Rowan County coach Jim Gantt said. “Caldwell knew he had to get that ball. He needed to make that call early and he did.”
Caldwell made the catch, on the run, banging against a brick wall at Finch Field, and Rowan County was one out closer to sweeping the series. In the scorebook, it was an ordinary popup to the second baseman, but it was an extraordinary play.
Rowan County (25-6) has pitched intelligently this summer and has swatted so many line-drive singles that nine of the 10 regulars are hitting above .300.
Still, it’s been defense that has separated Rowan County from its competition. In its two-game series with High Point, Rowan made two errors while High Point committed 11.
“You have to be good on defense to do anything, and you especially have to be good up the middle,” Gantt said. “We’ve got two college players. They’re both up the middle.”
East Rowan graduates Caldwell and catcher Dustin Ritchie played at Pitt Community College in Greenville this year. Ritchie performed well. Caldwell’s playing time was limited.
“When I committed to go to Pitt, I didn’t think I’d know anybody down there,” Ritchie said. “But then Michael went there too, and it really helped having him around. We’ve been teammates a long time. I think we’ve been teammates since we were 6 years old.”
Give credit to Rowan County athletic director Voight Basinger for recruiting Caldwell and Ritchie.
“Voight was calling me halfway through the school season, and I was starting to look forward to coming back for another Legion year,” Caldwell said.
Ritchie was tougher to sign up. He didn’t give his final answer until spring.
“Voight was calling me, but I didn’t recognize that number, so I wasn’t calling him back,” Ritchie said with a laugh. “So then Voight starts calling my dad and my dad starts calling me. The Legion gave me a $500 scholarship for school last year, and I appreciated that. It was also a chance to play for coach Gantt again.”
Gantt said Rowan’s automatic berth in the Legion state tournament as the host team was a factor.
“Caldwell and Ritchie knew we were going to be playing for a while,” Gantt said.
Caldwell was the Rowan County Player of the Year in 2014 for his role as East Rowan’s offensive catalyst and defensive anchor. He and Ritchie have been among the Legion team’s most valuable players.
Offensively, Caldwell is batting .322 and is tied for the team lead with Juan Garcia with 37 runs scored. Caldwell has 21 RBIs out of the No. 2 spot in the batting order.
Ritchie, who bats sixth, is batting .333 with 20 RBIs and 20 runs scored.
“We’ve done what we’ve needed to do,” Ritchie said. “I’ve never hit for a big batting average, but I’ve always knocked in some runs.”
Their defense has been even more important than their offense.
“Like a good umpire, a good catcher goes unnoticed,” Gantt said. “Ritchie doesn’t let balls get by him. He picks off runners and he throws out runners. He calls a really good game. I’m not comparing Ritchie to Drew Davis, but he does a lot of the same things Drew quietly did for the (43-2) 2002 team.”
Gantt put a lot of the game in the catcher’s hands, and Ritchie has been an ironman behind the plate. His backups are pitcher John Owen and outfielder Lee Poteat.
“I like the responsibility of calling the game,” Ritchie said. “If a pitcher shakes me off, if he doesn’t have confidence to throw the pitch I called, then it doesn’t hurt my feelings.”
Just two pitchouts have been called this season, both by Gantt. Both times the baserunner was stealing and both times Ritchie threw him out.
While Ritchie’s defensive contributions are subtle, Caldwell’s magic at second base has been obvious.
“He’s been solid on the routine plays, and he’s turned some great double plays when I didn’t think there was any way we could get two,” Gantt said.
This is the second Legion season for Ritchie, who battled injuries in his days at East Rowan.
Caldwell is in his third Legion season and is working with smooth shortstop Jeremy Simpson, a West Rowan graduate, for the second summer.
“It’s been a good summer,” Caldwell said. “We started out 2-4, but then we started coming together. It’s been fun watching this team evolve.”
Rowan has gone 23-2 since that shaky start.
Caldwell is heading back to Pitt Community College for a second season. Ritchie isn’t. He’s transferring to Rowan-Cabarrus Community College with the hope of playing for Catawba down the road.
Gantt is relieved both veterans took advantage of their final season of Legion eligibility.
“Ritchie and Caldwell gave us leadership and they’ve played critical defensive positions,” Gantt said. “Without those two, we don’t do what we’ve done this summer.”

SALISBURY — Hunter Shepherd has already participated in one World Series this year, but another appearance on the national stage... read more