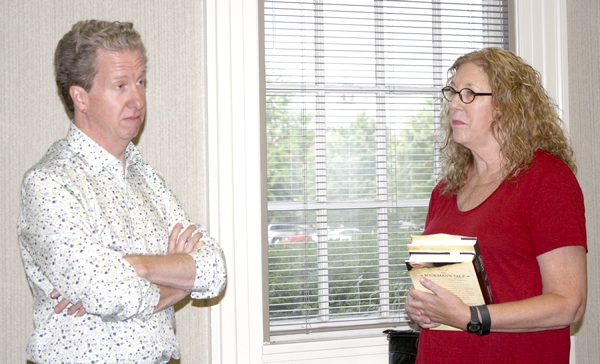 He parlayed those gifts into a New York Times bestseller, “The Bookman’s Tale,” and in to countless other publications —fiction, non-fiction, plays, scholarly works.

As the author of “First Impressions,” the second book in the Summer Reading Challenge, he came to Salisbury Tuesday night to talk about his book, which neatly tied into the first book of the Challenge, “Pride and Prejudice.”

Lovett is the son of an English professor who collected books. He grew up with a love of books and used to own an antiquarian bookstore in Winston-Salem.

Jane Austen was part of Lovett’s family culture. His father taught Victorian literature. “When I was about 12, seventh grade, I thought maybe I should read grown-up books, like for ninth graders.” He read “Brave New World,” which had just enough innuendo to make it exciting. Next, he read “Pride and Prejudice.”

“It’s not intended for 12-year-old boys in the 1970s,” he deadpanned. He revisited it in his 30s, and it was much more approachable.

Talking about “First Impressions,” he said, “I’ll start with the title, because everyone asks that question,” he said. Of course, it was the first title for “Pride and Prejudice,” and “if it was good enough for Jane Austen, it’s good enough for me.”

His first title for “The Bookman’s Tale” was “Marginalia,” which are the handwritten notes in the margins of books. He thought it was perfect, because that’s what the book was about. But it’s only meaningful to rare book dealers.

“The thing about historical fiction is you don’t want to know too much. Jane Austen has to be a fictional character. I’m not writing a biography.”

His goal for “First Impressions” was to get the dates and the places correct, because he believes “there’s a connection between where she lived and what she wrote. I wanted her personality to arise from the novel.” He reread her books, but not her biography.

The modern day character in the book, Sophie Collingwood, could have been a mirror of a Jane Austen character. Instead, Sophie is at a point where she’s going to have to make decisions that will affect the rest of her life, much as Jane Austen was.

Austen is “so witty and so precise in her wit,” he said. “She’s keenly perceptive about human relationships.” She tried to find success in a field of old, white men.

By the way, Rev. Mansfield is a fictional character. “So many people have told me they Googled him and couldn’t find anything.” He’s not real. But the allegorical stories Lovett used in the book are from a real book,

Sophie is trying to decide what to do to with her life when “the precipitating incident happens.” Readers were angry with Lovett for killing off Uncle Bertram — “If there were a film, I picture Stephen Fry.” Sophie has lead a sheltered life in her family’s stately home and at Oxford. “She’s got to get in the world.”

“I really liked Sophie, and yes, she’s morally ambiguous. I wanted readers to like her before she starts stealing books” and doing some other questionable things.

In Sophie’s mind, her actions are justified.

“I also wanted readers to be a little smarter than she is, in parts, especially in the man department.

“This gets the reader involved in the character. … She’s a sort of invocation of Jane Austen character types. … Winston is a charming rogue (like Mr. Wickham) and Eric is a Mr. Darcy.

“Some readers said Sophie is too 18th century, but to Sophie, ink and paper are as real as the outside world.”

How have Janeites, as avid Austen fans are called, reacted? “They’ve been great. Reviews have shown up on their websites. … The book is for sale at Chawton House,” a Jane Austen museum in a house her brother owned.

How did Lovett write a book that takes place in two different times. Well, first he wrote a book that takes place in three different times, “The Bookman’s Tale.” When he was working on that, he wrote a little bit here, a little bit there, then described each scene of the book on a slip of paper, laid all the slips on a table and started moving them around so it would make sense.

“I’m a strong believer in place and narrative,” Lovett said. He traveled to Steventon, Austen’s village, and although the house is long gone, he got a feel for the countryside. Sophie’s ancestral home is modeled after one that exists now in England. The house at Busbury Park, where Mr. Mansfield lives in the gatehouse, was “representative of all those old homes that didn’t survive, for one reason or another.”

The printer Gilbert Monkhouse of “First Impressions” is fictional. But the man he works for, Mr. Wright, was a real person who printed the Leeds (England) newspaper.

“I like finding real bits that mesh into the narrative.” The letters Jane writes in his book are  lifted from real Jane Austen books. “I used a lot from Northanger Abbey.”

Lovett has several projects published or in the works. He was asked to write the introduction to the 150th anniversary edition of “Alice in Wonderland.” In October, “The Further Adventures of Ebenezer Scrooge” will be published, a book he wrote 12 years ago and his previous agent didn’t like. His new agent snapped it up.

His new novel will come out in 2017, a story of the search for records of an early cathedral by a man who hates electronic devices. He’s joined by the woman who is digitizing all the cathedral’s records, so there’s plenty of conflict right there.

And, he’s curating an exhibit of “Alice in Wonderland” performances at the New York Public Library.

The only thing more fun than history is the present.