What now? ‘Fame’ serves as starting point for more dialogue 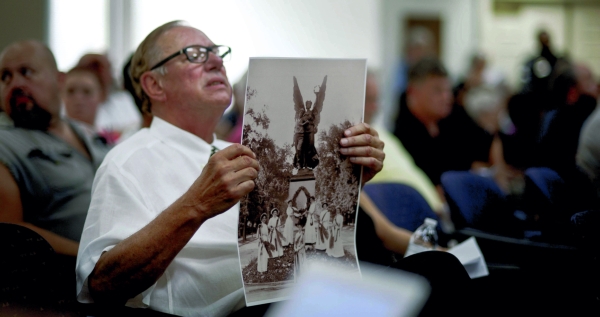 JON C. LAKEY / SALISBURY POST Bryce Beard looks over the information written on the back of a large print of "Fame" the confederate memorial statue located in the median of West Innes Street in Salisbury. Tuesday, July 21, 2015, in Salisbury, N.C.

SALISBURY — A standing room-only crowd produced 42 speakers Tuesday who weighed in on Salisbury’s 1909 Confederate monument and what it symbolizes to them.

But toward the end of the two hours of discussion, it came down to something the Rev. Timothy Bates asked Salisbury City Council: What now?

Bates said the real fight or debate isn’t about whether the “Gloria Victis” or “Fame” statue at Church and Innes streets should stay or go. Bates and other speakers challenged council members instead to talk about problems such as racism, employment, economic disparities, neighborhoods and crime.

Few speakers actually talked of removing the monument, but there were some calls for a new monument honoring the history and contributions of African-Americans.

Several military veterans spoke of the Confederate monument’s significance to them, and it was mentioned more than once how the U.S. government, since 1959, has recognized Confederate veterans as U.S. veterans.

Many of the speakers who addressed council also spoke of ancestors who fought and died in the Civil War. They stressed that “Fame” was a war memorial, not a monument to hate or racism. Removing it would be like taking down a gravestone, they said.

Likewise, others spoke of the monument’s significance as a work of art and what the sculptor’s intentions were.

But others stressed that images such as the Confederate monument take on different meanings to different people, and it makes a large portion of Salisbury’s population uncomfortable — as a symbol or constant reminder of systemic racism.

With the N.C. House action Tuesday afternoon in passing a bill to protect historical monuments and memorials (see accompanying story), Bates suggested the decision about the statue’s fate already has been made.

“Now what?” Bates asked council. “I’m going to leave you with that.”

Part of the answer to that question may come in a community forum July 30 at Hood Theological Seminary’s Aymer Center. Dubbed “Beginning a Healing Conversation,” the forum will include a panel of community leaders and be moderated by Dr. Vergel Lattimore, president of the seminary.

It will last from 7-8:30 p.m. and is free and open to the public. City Councilwoman Karen Alexander informed Tuesday’s crowd of the forum before discussion on the monument began.

According to a flyer for the event, the purpose “is to foster better relations, respect and understanding regarding race, justice and peace.” The seminary is located at 1810 Lutheran Synod Drive.

Because of the large crowd Tuesday to talk about the monument, some people watched the council meeting on televisions set up in the City Hall’s lobby. A strong police presence was in Council Chambers, and notes on the entrance doors asked people attending not to display signs or flags.

Those who spoke were given a maximum of three minutes, and a long, steady line formed down the middle of  council chambers as speakers waited their turn to address the board.

The audience applauded many of the people as they finished.

After the comment session was over, Mayor Paul Woodson said he was impressed at how eloquent and prepared the speakers were and praised the participants for the respect they showed each other.

Woodson labeled it “a great dialogue.” Councilman Brian Miller noted how limiting the public comment format could be within the structure of the council meeting and said it was mainly a chance for council to listen.

Miller said there would be better opportunities later for discussion of issues that were raised but haven’t been dealt with in many years. “This is an exercise in civics,” Miller said of the discussion.

Miller added he thought everyone in the room agreed more with each other than they disagreed.

Mayor Pro Tem Maggie Blackwell said she especially liked Bates’ question of what now, and suggested some of that dialogue can start with the July 30 community forum.

Alexander said she hopes some group could come together to create a new symbolic piece of art for the African-American community, but she cautioned it should be a people project, not a government one.

Councilman William “Pete” Kennedy was on a scheduled vacation and could not attend Tuesday’s meeting. Because of the crowd, Woodson moved the public comment session on the statue to the first thing on Tuesday’s agenda.

Jonathan Hawkins said the monument to him has always been a part of Salisbury and a symbol of N.C. veterans from all wars — from the American Revolution to Operation Enduring Freedom.

When he was a soldier overseas, he kept a picture of “Fame” with him at all times. “When I was done, or I was upset, I looked at that picture and said, ‘I’m coming home,'” Hawkins said.

Jake Helms an Army veterans, said eight people in his family served for the Confederacy, and none returned home alive. The Salisbury statue is a monument to “them, me, every veteran,” he said. “… “It’s not hurting a fly where it sits.”

Archie Tucker said the community seems to be spending more time trying to tie knots than untie them. When the statue was erected, it was not done out of racism, Tucker said.

“I see character, not color,” he added.

Steve Poteat said the monument should stay and it would be “a direct slap in the face,” if it were removed, relocated or parts of its inscriptions hidden. He said it was a monument on private property meant to honor all the Confederate veterans in Rowan County.

It’s an issue “that will go away, if you let it go away,” Poteat told council members.

James Ward, a U.S. Marine, asked council not to succumb “to the flash mob frenzy sweeping the South.”

“I ask that you not join the likes of Stalin, Hitler and ISIS in eradicating history,” he said.

Bryce Beard said his great-great grandfather, John Beard, was serving the Confederacy when peace came at Appomattox April 9, 1865, and John Beard’s daughter, Caledonia, was at the monument’s dedication in 1909

It’s a monument, Beard said, meant to honor men who sacrificed their lives in the cause for Southern independence. He added it would be appropriate to donate land at the other end of Fame’s median, at Innes and Jackson streets, for a monument to African-American history.

“Shared history has to be recognized and honored,” Beard said.

Susan Sides, a local historian, said Fame’s sculptor Frederic Wellington Ruckstuhl was a religious man, and she could find no hateful connotations in any of his works, which are displayed in many significant places.

“We’re so fortunate to have a piece of his work” on display,” Sides said.

Whitney Peckman said it must be asked whether Fame represents everyone’s heritage. The monument does not represent the story of Salisbury’s 52 percent of people of color, and the community must face some hard truths with open hearts, she said.

“Let’s begin with a dialogue,” Peckman said. She expressed support for a monument of equal presence downtown that would be designed and installed by the African-American community.

Several people said the statue was simply serving as a starting point for discussions on bigger issues facing the African-American community. Nan Lund said it wasn’t about the “angel” but it was “about the feeling in this community that seeing the angel brings up in people.”

Lund said she sees “a veneer of politeness” in Salisbury that hides what’s actually going on, and she suggested a disparity when it comes to things such as schools, pharmacies, grocery stores and neighborhoods. “We live in a town of white privilege,” she said.

Kenneth Fox Muhammad said people were right to embrace the heritage of the statue — “I appreciate that.” But he asked where was the statue commemorating black people and black soldiers.

He said blacks weren’t protesting the statue by the thousands because they don’t think anything will be done. Twenty years from now, Muhammad predicted, the community might be back talking about the statue again and not the real problems.

Robert Smith said he had not heard anyone say take the statue down. Rather, citizens are saying they want to open a conversation, Smith said. A lot of things in the community seem one-sided, he added.

The Rev. Fleming Otey suggested that Fame be moved “15 minutes down the road” to the old Wilcox bridge spanning the Yadkin River. He also pushed for a second dedication of the monument to all soldiers and warriors of all ethnic backgrounds.