Military personnel safer on base when armed 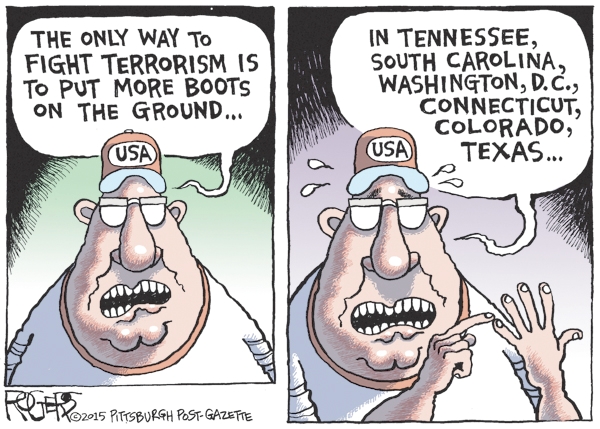 It will be weeks or perhaps months before the investigation concludes into what some authorities have called an “act of terrorism” at two military recruiting stations in Chattanooga, Tenn., last week.

A man identified as Mohammod Youssuf Abdulazeez, 24, opened fire without warning from his car with a number of weapons. Five Marines were killed and one other and a police officer were injured in the attack.

Abdulazeez, a naturalized American citizen from Kuwait, died in a battle with local law enforcement soon after.

The attack is the third act of domestic terrorism carried out on U.S. military facilities since 2009. A fourth attack not considered an act of terrorism, in which 12 people were killed and three wounded at the Washington Navy Yard, occurred just two years ago.

In June 2009, Muslim convert Abdulhakim Mujahid Muhammad killed one soldier and wounded another at a recruiting center in Little Rock, Ark. In November of that year, Army Major Nidal Malik Hasan carried out an attack at Ft. Hood, Texas, that left 13 dead and 32 wounded.

These combined attacks at military facilities bring the casualty count to 33 dead and 55 wounded by gunfire since 2009.

Despite being active-duty servicemen with military weapons training, few of the victims in these attacks had an opportunity to defend themselves, thanks to Department of Defense Directive 5210.56, enacted in 1992 under President George H.W. Bush.

That policy strictly limits the military and civilian personnel who can carry firearms at military facilities to those in law enforcement or security roles. U.S. bases and recruiting centers have been “gun-free zones” ever since.

The directive made sense at the end of the Cold War, when the risks of sabotage to nuclear missile sites and command-and-control facilities were thought to be lower. The world has changed since then, and we now find ourselves embroiled in a global war on Islamic extremism.

Non-state enemy actors, including Islamic State, are pursuing the strategy of radicalizing converts within the United States to carry out attacks on Americans. Although we cannot harden every possible terrorist target in a nation as large as ours, there is proverbial “low hanging fruit,” which means we can make some targets less vulnerable with minimum effort.

One of the easiest safeguards would be for the Obama administration to revise the gun rule that has made military targets such easy prey to armed attackers.

Every military recruit has had basic weapons training, and many officers and non-commissioned officers are trained and regularly qualify to use the military’s standard-issue handguns.

The Department of Defense could, with relative ease, enact a policy that states that the ranking commissioned officers and ranking non-commissioned officers must carry issued handguns while on duty at all department facilities employing uniformed personnel, from the largest base to the smallest recruiting facility.

Such a policy would ensure that there would be an armed deterrent to acts of terrorism on military targets, even at those facilities too small to warrant dedicated military or civilian security personnel.

On larger bases — many encompassing hundreds of thousands of acres — these armed ranking officers could provide immediate defense until existing base security arrives.

As a matter of practical safety, the issued pistols could be carried on an empty chamber with a loaded magazine in the gun. The risk of an accidental or negligent discharge in that case would be zero, but 15 rounds could be chambered in a matter of seconds to respond to attacks. This would give our military people a fighting chance against home-grown extremists.

All of the so-called domestic terrorism attacks at military sites have happened on President Barack Obama’s watch. It’s past time for the president to direct the Department of Defense to allow our servicemen and women to defend themselves on base while they serve.

Bob Owens is the editor of BearingArms.com, and the author of the e-book “So You Want to Own a Gun.” He wrote this for the Los Angeles Times.