Lunchbox 21 — meals that make a difference 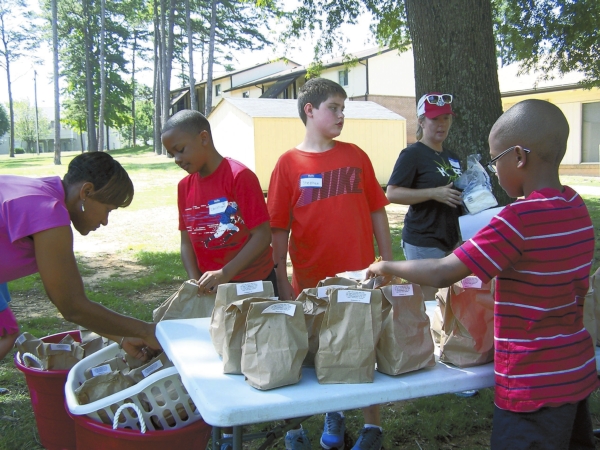 Home school mom, Melanie Scott and her sons, A.J. & Christian and Stephen Moseley, & Adriana Bain (all volunteers) preparing to hand out the lunch bags at the apartment complex. Submitted photo

KANNAPOLIS — Most kids take it for granted that they will have a three meals a day. Some kids aren’t that privileged. They crave just one. Sounds like a scenario from a Third World country, but it is reality right here in our community.

Terri Stancil, director of Refuge of Hope Soup Kitchen in the Centerview community, asked Adriana Bain if she would consider coordinating a lunch program for underprivileged children. Terri knew of an apartment complex in Kannapolis that was in need. Bain had volunteered with her family at the soup kitchen and loved serving there.

She had also traveled to Honduras in 2014 with her husband, Brian, and they experienced the extreme poverty of that region. They had worked at an orphanage through Children’s Impact Network. Their lives were changed forever.

The 21 signifies the number of days the meals will be served during the summer. The program began on June 26 and runs through August 14. Ninety-five children and elderly will be served each time at the apartment complex. For some, it’s their only balanced meal of the day.

Three days a week, the Lunchbox 21 Volunteer Team packs the lunches at the soup kitchen. Then they head to the apartments to set up under a large double oak tree. Children from the complex gather under the tree on quilts to eat their nutritious meal. After the meal, volunteers interact with the children and play football or tag. Bain said, “I crave for the people in the community to come together to serve God, no matter what their denomination or cultural background is.”

People from the community are responding. Churches are posting it in their bulletins and others are posting on social media pages. Bain commented, “God is opening doors and providing.”

Bain’s great-great grandfather, C.H. Castor, was a grocer in the Centerview area in Kannapolis almost 90 years ago. Her great-grandfather, Ross Castor, owned a grocery store with his brother-in-law, Grady Ross, in the same building in the 1950s and ’60s. The building is still standing across the street from the soup kitchen in Centerview. Current merchants are A Cut Above Barber Shop and Wilkes Tax Service, Inc.

Both stores had closed by the early 1960s. Most of their customers lived in the mill village and worked for Cannon Mills. Donald Castor Sr., Adriana’s grandfather, who is still living, recalls delivering groceries for his dad’s store. His brothers, David and Phillip also worked for their dad’s store.

Customers would dial 45L, and orders were filled and delivered to their homes. Customers paid every two weeks when they received their paycheck from Cannon Mills. Occasionally, when the money was short, the tab was waived.

Bain did not know that her ancestors were grocers in the Centerview area across the street from the Soup Kitchen until a family member shared the story with her. She said, “It is a blessing to see God’s hand in the bigger picture of our lives. He does not leave out any details. It’s humbling to know that almost 100 years ago, people in our family were providing for other people’s needs.”

Get connected with Lunchbox 21

Melanie Scott, a homeschool mom, had seen the opportunity to serve with the Lunchbox 21 Program on Facebook posted on the Greater Cabarrus Community Homeschool Projects page. Scott knew that she wanted her two boys, A.J. and Christian, to participate. They joined Bain and some other volunteers on a hot Friday morning to serve lunch at the apartments.

If you would like to get involved with the project this summer, contact Adriana Bain at adbain5@gmail.com. Food items may be dropped off at the Refuge of Hope Soup Kitchen at 511 Old Centergrove Road, Kannapolis, on Monday, Wednesday or Friday between 9 a.m. and 1 p.m. at the back of the building.