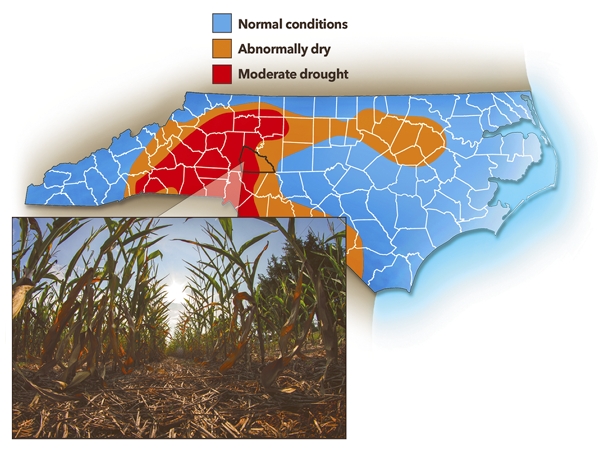 Graphic by Andy Mooney, photo by Josh Bergeron Brown leaves hang off of corn stalks near Sherrills Ford Road in the Mt. Ulla Area. In 2015, much of West Rowan has suffered from a moderate drought. One of the most immediate signs of the 2015 drought on corn is short stalks.

Summer showers have sprinkled some areas of Rowan and the Western Piedmont, resulting in a moderate drought for a large swath of the state, but it’s unclear if relief will come before the end of summer.

Toddler-sized corn stalks are a relatively common sight in Rowan. Just over the border, in Stanly County, most commercial corn crops are doing better.

Cooperative Extension Director Darrell Blackwelder said the inconsistency is a result of spotty rain and repeatedly high temperatures. Some areas have seen adequate amounts of rain, while others — western Rowan for example — are significantly below expected rainfall totals.

“This time of year, we get a lot of our precipitation from afternoon thunderstorms, or pop-up showers,” Cumbie said. “Right now, we’re starting to see some hit or miss patterns, where some places are consistently being hit with rain and some places continue to miss.”

The U.S. Drought Monitor, which focuses on broad-scale conditions rather than drought conditions in specific areas, has declared much of the western Piedmont in a moderate drought. The area forms a sort of triangle, spanning from Henderson County in the southwest portion of the state to Stokes County in the north and Union County at the southeast portion of North Carolina’s drought.

The drought has forced Rowan-area farmers to rethink their annual corn crop. The Piedmont Research Station on Sherrill’s Ford Road was affected by the drought too.

“Because of the drought, we’ve not been able to produce what we would normally need to,” said Piedmont Research Station Superintendent Joe Hampton.

The station usually requires about 3,000 tons of corn silage — a type of animal feed — for its livestock, Hampton said. In order to store enough food for livestock at the research station, the state-funded facility last week purchased and harvested 700 tons of locally-grown corn silage at a cost of about $25,000.

Hampton said the station considered purchasing different types of feed from other states, but chose locally grown corn because it was identical to what the livestock already ate.

The Piedmont Research Station and Extension Service also hosted an informational session with N.C. State University professors about the potential pitfalls of a drought-stressed crop.

Farmers, state employees and researchers have said the corn crop largely won’t improve from its current condition. Blackwelder and Hampton said corn requires rain during a specific window of time for optimal outputs.

It’s not all bad news. Grapes and other types of fruit grown in drought-stressed conditions typically are sweeter, Blackwelder said.

Soybeans and other crops may have a chance to recover from the drought, but it’s unclear when relief might come. One prolonged storm won’t completely solve drought problems. Rowan ranks among the worst-hit across the state. Hickory and North Wilkesboro are the worst affected by this year’s drought. The two cities have received 10 inches less rainfall than normal for the year. Some areas in Rowan are 6 inches or more below average for the year.

The most predictable, prolonged period of rainfall could come this fall or winter with El Niño — a weather pattern that traditionally means cooler and wetter winters in North Carolina – Cumbie said. And, this year’s El Niño is projected to rival the strongest in recorded history.

In the immediate future, however, the U.S. Drought Monitor predicts a high probability of above average temperatures for the next six to 10 days.