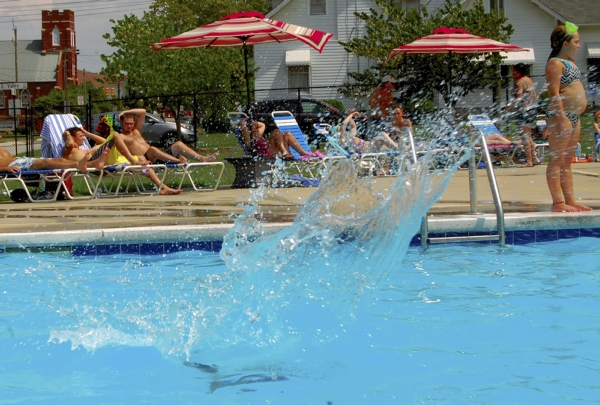 Under the Landis' voluntary water restrictions, pools can be topped off, but those filling a new pool should ask for a permit. Jeanie Groh/Salisbury Post

Local water supplies are beginning to feel the effects of this summer’s unusually dry and hot conditions.

The Catawba-Wateree Basin, which supplies Kannapolis’ water, is no exception. In fact, the basin was into the first stage of drought levels Monday, and the Catawba-Wateree Drought Management Advisory Group asked its users to begin taking voluntary conservation efforts through its drought management plan.

Since Landis purchases a majority of its water from Kannapolis, they too are included in the conservation effort.

It’s been a few years since the town’s seen water levels this low, and while he said the town is “nowhere near an extreme level of a drought,” he said conservation is still extremely important.

“We don’t want to find ourselves in a situation like we did several years ago,” Linn said.

Linn added that there aren’t any fines or fees connected with the conservation measures.

He encouraged citizens to take simple steps to conserve, such as waiting until the dishwasher or washing machine is completely full before starting a load.

“It will help us a lot to conserve,” he said.

According to a press release from the Catawba-Wateree Drought Management Advisory Group, “Under normal, responsible water use guidelines adopted by Concord and Kannapolis, lawn irrigation is only allowed on Tuesdays, Thursdays and Saturdays.”

Violators will be notified and could be fined.

Those who do choose to water their lawns are encouraged to water during the early morning or late evening hours.

During the voluntary restriction phase, the following activities are permitted, but users are encouraged to limit:

Landis resident Carol Hollar said the restrictions don’t bother her, but added that it’s been a long time since she last remembers having water restrictions.

“I’ve always been conservative because my daddy was,” she said.

Paige Graham said as long as she can continue to water her garden, she’s not concerned with the water restrictions, either.

Rather than let her children play with the water hose in the yard, she takes them to the pool.

Salisbury doesn’t currently have any water restrictions in place, but according to City Manager Lane Bailey, the possibility has been discussed.