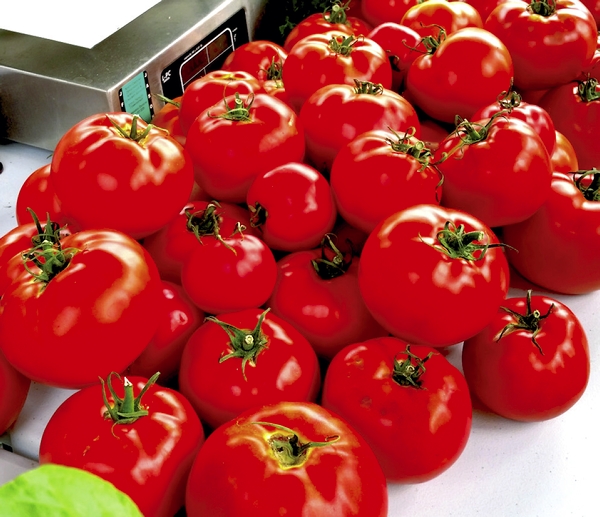 Cooperative Extension There will be plenty of tomatoes for the Salsa Showdown Saturday at the Farmers Market.

If you haven’t been to the Salisbury Farmers Market lately, you must go.

You can get corn, both silver queen and bicolored. watermelons, cantaloupes and other melons that might be new to you, such as

It’s time for blueberries and peaches, too.

And there’s plenty of tomatoes, from heirlooms to great big Better Boys. You can still get squash, from yellow crookneck to butternut, and zucchini.

You want cucumbers? Small, large, white and Persian. And every color you can imagine of peppers, even some you’ve never seen before.

Or try some crunchy bok choi or long beans, or a couple different varieties of green beans, and some turnips.

This Saturday is the Salsa Showdown at the market, where you can also find garlic, onions, tomatillos and hot peppers.

There’s a $5 entry fee, and each contestant will get tomatoes, salt, pepper and limes to concoct your masterpiece salsa, with other ingredients available at the market.

Hurry up! You have to register by Thursday. You can get the application online at http://salisburyfarmersmarket.com/images/forms/SFM-SalsaShowdown-registration.pdf

You thought, you were led to believe, even, that the one cereal from your childhood that you could still eat with a fairily clear conscience was Cheerios.

And then when Cheerios came out with a protein version, well, that made it seem even more virtuous.

Hold on, says the Center of the Science in Public Interest. Their review found that. per calorie, Cheerios Protein has no more protein than regular Cheerios. It costs more and has 17 times the sugar of the original. Seventeen times?! Therefore, it has twice the calories, 210 in the protein version vs. 100 in the regular, per serving.

Yet another reason to read the label carefully.

We hit on a trend

At the 61st annual Summer Fancy Food Show, these were the top five trends.

Gazpacho soup in a bottle – lotsa soups in bottles were spotted, but this one was at many booths, and it also came in pouches.

Beets (yep, we knew that) All sorts of new products featuring beets, from beet hummus to beet salsa to a beet-blueberry bar.

Wonder which trend will make an impact? Bet on the hop pickles.

The new cupcake is all about ice cream

When the Huffington Post wrote about summer food trends, they came up with this shocker: ice cream sandwiches are the new cupcake. In Maine, anyway. Look for versions with homemade cookies and different flavors of ice cream, or a S’Mores Burger, with Nutella spread, brulee marshmallow and vanilla ice cream with fancy sea salt on a brioche mini. Tres chic.

Why do all these names have to be so long?