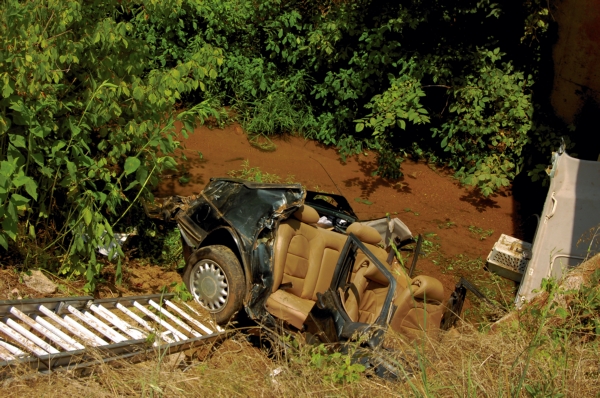 A vehicle drove off the road and down a 12 foot creek bank Monday afternoon. Three people were trapped inside the car. Jeanie Groh/Salisbury Post

N.C. Highway Patrol is investigating an accident that sent a sedan down a 12-foot creek embankment Monday afternoon.

The accident was initially called in at 12:11 p.m., and it took roughly 30 minutes to extract the three occupants from the vehicle.

Trooper J.P. Best said the car was traveling south on Saw Road, toward Enochville Avenue in the southern part of Rowan County, when the driver lost control and the car plummeted down the embankment.

Best said the driver, 55-year-old Barbara Camille Sain, claimed that another vehicle cut her off, causing her to run off the road. He added, however, that the cause has yet to be determined.

Enochville Fire Chief Clark Mackey said extrication tools had to be used to free Sain and her two passengers – her mother and cousin. The process took roughly 30 minutes, and all three individuals were transported to Carolinas Medical Center NorthEast.