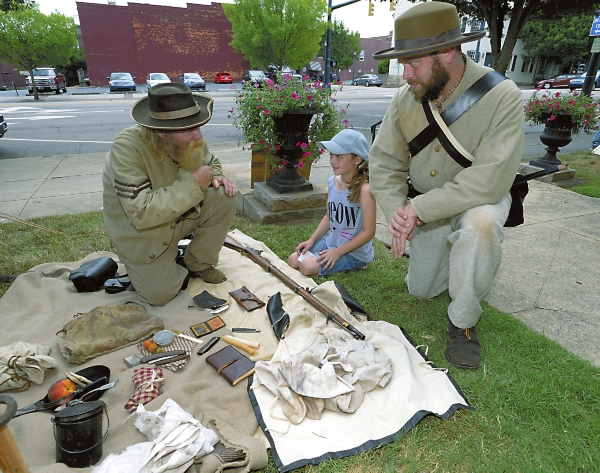 Civil War re-enactor Bob Etzler shows 10-year-old Alana Carlyle the gear of a Civil War soldier in the Rowan Museum's culmination of the museum's Civil War History Camp for students. On the right is Stephen Wolff. photo by Wayne Hinshaw, for the Salisbury Post

Phyllis Mahmud was driving down Main Street after church when she spotted an unusual site – Union and Confederate soldiers were camped on the lawn of the Rowan Museum.

“I was just riding by,” she said, but added as a member of a family with deep roots in this country’s military, she felt compelled to stop.

Members of the 28th Regiment North Carolina Infantry Reactivated greeted Mahmud and other visitors and showed them around museum grounds, where they had pitched different style tents like those Civil War soldiers would have slept in.

“I think it is a great opportunity,” Mahmud said, adding that she enjoyed seeing the way the soldiers lived.

“You want the history to be portrayed in the best manner,” she said.

One of the soldiers had his military pack on display. He explained what each item in the bag was and how he used it.

“He let me hold it a minute,” she said, adding that it was extremely heavy.

“You had to carry those things a lot of miles,” she said.

The experience, she said, made her appreciate the sacrifice of those who serve in the military even more.

Other reenactors talked about their clothing, accessories, and what they did for relaxation.

One teen talked about how bayonets were used much more for cooking and other utilitarian uses than on the battle field. Another one talked about the canteens soldiers carried.

Christina Mankin, a teenaged girl, explained her costume in detail to visitors who came through the museum. She was wearing one hoop skirt, two petticoats and a corset. Another woman showed the types of games and toys children during that time would have played with.

The magnitude of the conflict alone makes the Civil War a “significant part of America’s history,” said Stephen Harris, a member of the 28th Regiment North Carolina Infantry Reactivated.

“Many of us had ancestors who fought in the War Between the States,” he said, adding that that’s what makes it so personal.

The group reenacts both as Confederate and Union troops.

“We’re trying to represent both sides of history,” he said. “It just depends on the weekend.”

Fellow infantry member David James said it comes as a shock to many that there were southerners in the Union Army.

They give “the public a view of what it was like,” he said.

David Freeze: Will this be the one? Blame it on the glaciers

Editor’s note: Salisbury native David Freeze is cycling from Mobile, Ala., to Toronto, Ontario, Canada. The Post is chronicling each... read more