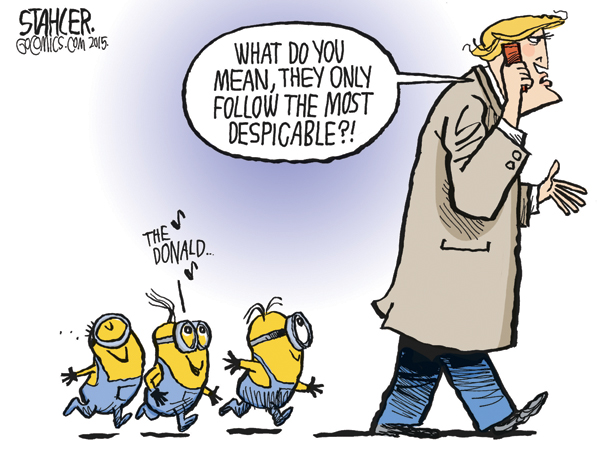 Two takes on Trump: The Donald is No. 1?

Yes, it’s an early poll and, as such, pretty near useless.

Yes, Herman Cain was once No. 1, too, and we know what happened with that.

Yes, the fact that he is number one probably reflects name recognition as much as anything else.

And no, he will never be his party’s nominee, much less this country’s president. It won’t happen even if GOP National Committee Chairman Reince Priebus has to personally shoot him with tranquilizer darts on the way to the podium to stop it.

All that said, don’t let anyone tell you it means nothing that Donald Trump has surged to the top of the Republican field, according to a new USA Today/Suffolk University poll. Don’t let anybody say we ought not note with alarm the fact that 17 percent of Republicans think this loud-mouthed, attention-seeking self-aggrandizing carny barker is fit to be president.

And what do 17 percent of Republican votes see in this cornucopia of the bizarre? Let 59-year-old Steve Fusaro of San Clemente, Calif., speak for them all: “He’s got some backbone,” he told pollsters.

Apparently, that’s what nearly one in five Republican voters sees in Trump. As a result, some of us are forced to see in them a fresh, depressing sign that the party of Lincoln, Eisenhower and Reagan is not yet ready to come in out of the cold. It — or at least, a significant fraction of it — continues to embrace a politics of bigotry and resentment, an estrangement from objective reality and a belief that the simplest, most simple-minded solution shouted in the loudest voice equals wisdom.

Once upon a time, the Republican Party was a sober-sided collective that strategically pandered to the resentments of a loud, fractious, ultra-conservative wing. But increasingly, that tail now wags this dog. And if you disagree, go back to the top and read it again:

Sure. Why not? Didn’t he promise to build that wall and make Mexico pay for it? There you go, right? Immigration solved, right?

Well … no. But the very fact that so many of us apparently think so provides a vivid illustration of the anti-intellectualism and deep-fried yahoo-ism now holding the Republican Party hostage.

Somehow, the party of Teddy Roosevelt, Gerald Ford and Bush the elder has become the party of secession talk, revolution talk and vigilantes harassing children on the Southern border, the party of the “war on whites,” “the war on Christmas,” tea parties and birthers, the party of anti-science, anti-history and fear that the U.S. military is, right this moment, preparing for the invasion of Texas. In a word, the party of crazy.

Small wonder it is also the party of Trump.

Yes, cooler heads will soon prevail and some establishment candidate will carry the banner into battle.

We should take no solace in the fact that Trump will eventually fall from his lofty perch. Rather, we should wonder what it says about the GOP that he was up there in the first place.

Two takes on Trump: Conservatives should welcome him

By Mark Davis The Dallas Morning News It’s hard to know which is a more compelling summer pastime: tracking the... read more