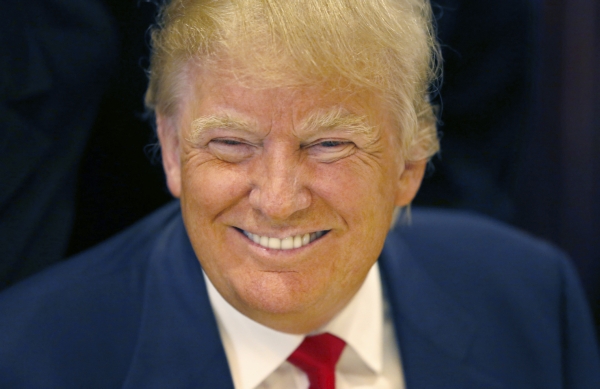 Donald Trump is seeking the Republican nomination for president in 2016. AP photo

Two takes on Trump: Conservatives should welcome him

It’s hard to know which is a more compelling summer pastime: tracking the latest burst of news from the Donald Trump campaign or watching his critics contort themselves in response.

The headlines seem hatched from the very belly of Trump campaign headquarters: A Mexican drug lord escapes, enabling him to revisit a favored theme of Mexican lawlessness. The Obama administration signs onto a nuclear pact with Iran widely viewed by conservatives as a capitulation, enabling Trump to peg the president as a lousy negotiator.

Democrats think they can broad-brush an entire GOP candidate field with Trump’s real and perceived excesses. No single candidate defines a party. Do Hillary Clinton and her mostly obscure other rivals have to run around answering for the momentary wow factor of Bernie Sanders?

Liberals gleefully attracting attention to Trump should know that many of his meaty poll numbers are swelled by voters usually paying zero attention 16 months before an election, including some younger and-or less ideological folk who might otherwise lean Democrat.

In conservative circles, candidates and pundits alike seem stunned and clueless in the face of Hurricane Donald. The sudden infusion of brash directness and spirited combativeness has discombobulated them while simultaneously delighting millions of real people.

That’s a disconnect worth noting. If candidates and commentators are freaking out at developments many in the GOP base are thoroughly enjoying, that is an out-of-touch-warning that should not be ignored.

Candidates know they are in a spirited fight. Even as their ranks swell well past a dozen, though, there was always the comforting reassurance that each would behave by a long-seasoned set of rules: say little of real impact, keep a mundane tone, avoid taking stands that might raise an eyebrow in early primary states.

These drowsy behaviors have made it easy for analysts to look smarter as they fairly effortlessly weigh in on the actions and words of politicians following predictable formulas.

With the Trump bull destroying their china shops, some of his rivals have reacted with skittish eagerness to distance from his observation about crime at the hands of illegal immigrants. It would have made no difference if he had restated 10 times that he was not talking about all Mexicans. Any conservative invoking the consequences of soft borders — and crime is surely prominent among them — would be pilloried as a bigot by the media and apparently by more than a few Republican rivals.

Those rivals should know that their haste to berate Trump makes them look nervous and edgy as they apply for a job that will apparently involve dealing with a nuclear Iran. If they can’t handle one mouthy New Yorker, it is hard to imagine them steely-eyed against global terror.

Similarly, opinion merchants insulting Trump in an effort to establish high-minded, mannerly professional cred should know that they come off as condescending and unnerved.

So what should they do? Enjoy the ride with the rest of us. Relax. Any candidate asked about Trump should reply that he is welcome to say whatever he wishes and be judged on it along with the rest of the field.

Trump’s chances of the actual nomination remain remote. But his value is already clear: He is a divining rod that finds issues that resonate, and a touchstone that reveals who can handle his presence and who cannot. Voters are paying close attention to both.

Mark Davis is a North Texas-based conservative talk show host. He wrote for the Dallas Morning News. Readers may email him at markdavisshow@gmail.com.

How one town tackles the digital divide

From an editorial in the Durham Herald: Lots of pundits, politicians, academics and activists decry the digital divide and its... read more