Stepping into the past always a joy for Charlie Lovett 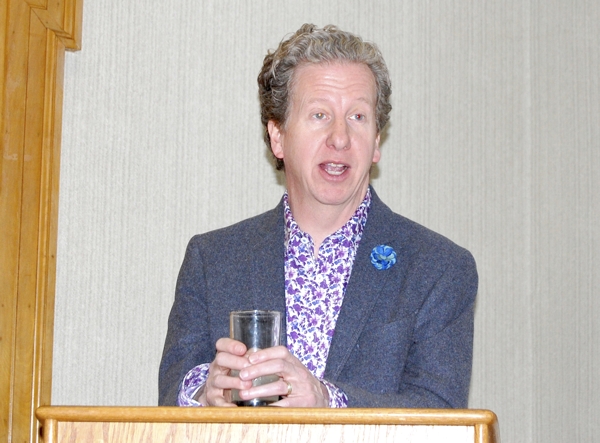 Charlie Lovett came to the Rowan Reading Rendezvous held this spring at Rowan Public Library. An entertaining speaker, he talked about his books and his history.

His first book was the New York Times bestseller “The Bookman’s Tale.” Charlie used to be an antiquarian bookseller, so he wrote about buyers, sellers, people who steal books and people who collect them.

He says in “The Bookman’s Tale,” everything it’s about is in the first four pages. The character Peter is an antiquarian bookseller. The book is about Shakespeare, forgery and crime. It takes place in three different time frames, one of which is 1995, because he wanted it to be before widespread Internet use, because the way booksellers then found special, rare or unusual books was by looking for them, going into basements, knowing other booksellers. “Now, it’s just a few clicks away. It’s much harder to find a book you’re not looking for.” In the novel, Peter finds a book related to Shakespeare and he has to find the truth about it before the bad guys find him.

The middle story is in the mid-1980s when Peter is in college, Richfield University, similar to Charlie’s alma mater,  Davidson College.

Charlie spent a lot of time at the library at Wake Forest University — his father was an English professor there — and its rare book room.

The middle story is also a romance about Peter. The back story is about the book Peter finds and how it moved through time over 400 years, from 1592-1879.

There are a lot of real people in the book, including Christopher Marlowe and Shakespeare.

In the 1980s, Peter is learning about forgeries; in the historical time frame, forgeries are being created.

His second book, “First Impressions” takes place in two times, the Jane Austen era and modern day, and is all about Austen.

Charlie uses all five senses imagining what the characters are doing. The reader has the text and the physical book, and has more engagement with paper and ink. Charlie has to know how characters interact with physical objects.

His next book should be out in October, “The Further adventures of Ebenezer Scrooge,” a sequel, if you will, to “A Christmas Carol,” that covers the time following Scrooge’s conversion to a generous, but annoying man.

Lovett, a collector of books and artifacts connected to Lewis Carroll, is working on a new book involving the author, about whom he has written and lectured extensively.

Charlie told those at the Reading Rendezvous that he takes lots of notes, and thinks a lot before writing. Then he goes at it in huge chunks of writing.

He does a lot of research, some ahead of time and some on the fly. “I  love the process of discovery,” he said.

He has written all kinds of things, from book reviews to children’s plays, non-fiction, fiction, and he’s familiar with rejection. But “at every step of the journey, I was happy to be doing what I was doing.”