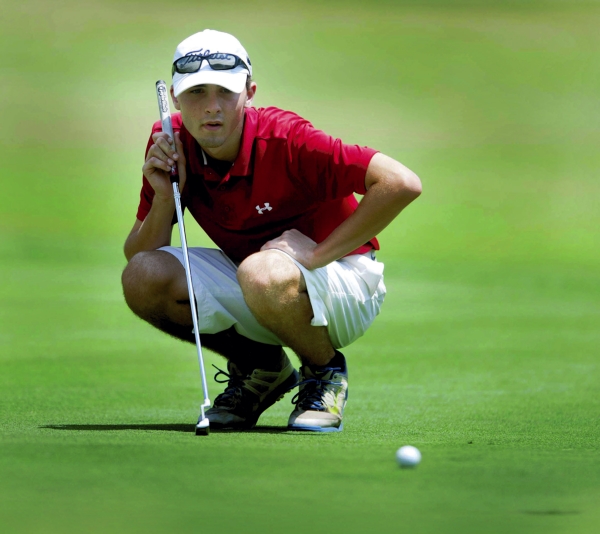 Nick Lyerly lines up his putt on the 17th green, where he closed out the match, 2 and 1, winning the title over Eric Mulkey. JON C. LAKEY / SALISBURY POST

Eric Mulkey defeated Nick Lyerly in the final of the 2014 Horace Billings Rowan County Amateur Golf Tournament. When the two players teed it up Sunday morning for their semifinal matches in this year’s championship, there was a chance for them to tangle again for the title.

“I did want another shot at him. I knew it was going to be tough, but I was kind of hoping for a rematch,” Lyerly said in a phone interview. “I wanted to see if I could beat him or not.”

The rematch happened, thanks to Lyerly’s semifinal victory over Andrew Morgan and Mulkey’s win over Derek Lipe.

The championship, this time, went to the sixth-seeded Lyerly. He knocked off the top-seeded and defending champion Mulkey, 2 and 1, on Sunday at Corbin Hills Golf Club.

Lyerly needed only seven holes to jump out to a three-up lead. Mulkey battled back with birdies on the eighth and ninth holes to get to within one.

On the par-four 12th hole, a crucial missed birdie putt from just four feet by Mulkey didn’t result in a loss of the hole, but it didn’t square the match either. Mulkey followed that with a bogey on the par-three 13th, giving Lyerly a two-up lead with five holes to play.

“I think that was the turning point in the match,” Mulkey said afterward in a phone interview. “I don’t want to say it carried over on 13 because I didn’t lose the 12th, but I could have easily won it.

“… With a kid as talented as he is, you can’t squander away holes like that.”

The two halved the next four holes to give Lyerly, a rising senior at East Rowan, the championship.

“It feels pretty good to be champion,” said Lyerly, who won the NCHSAA 3A state championship in May. “I know what losing feels like from last year when Eric beat me. This feels better.”

Lyerly got to the finals thanks to a string of dominating victories. He defeated Dwayne McIntyre 7 and 6 in Round 2 and then beat George Benfield, 5 and 4, to advance to the semifinals. Lyerly said Morgan, his semifinal opponent, didn’t play up to his normal level, which allowed Lyerly to win, 9 and 8.

Lyerly started the championship match the same way he started his others, with a victory on the first hole. He said he won the first hole in each of his five matches during the tournament.

Mulkey said getting down after the first hole didn’t put any pressure on him because there are still 17 left to play.

On the fourth tee, Lyerly almost made a mistake when he teed up his ball outside the markers. Mulkey pointed it out to his opponent before the ball was put in play. The USGA rules say, in match play, no penalty occurs if the ball was played outside the teeing ground, but an opponent can force the player to re-tee the ball and play a second ball.

Lyerly said Mulkey could have been a poor sport about it and said nothing, but instead, Mulkey corrected his young opponent. Lyerly said that he appreciated Mulkey doing it that way.

The only regret Mulkey had about losing Sunday was he didn’t get the chance to be a repeat winner.

“It’s good to see a youngster like Nick win,” said the 34-year-old Mulkey. “He’s a good kid. It doesn’t bother me (to lose). The only thing that bothers me is I would have been the first repeat winner in a long time. When you get to my age, the opportunities grow smaller and smaller and not bigger and bigger.”