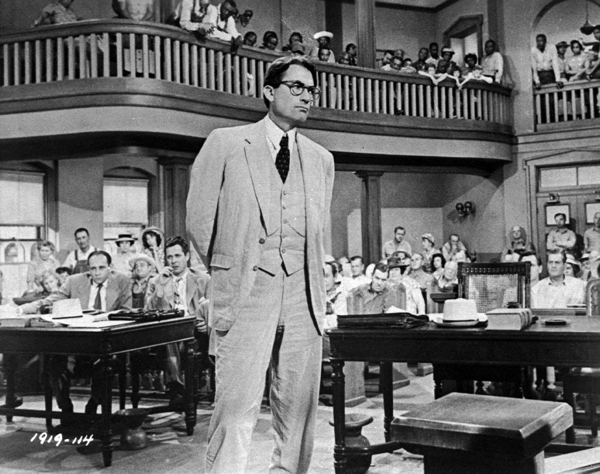 Gregory Peck is shown as attorney Atticus Finch, a small-town Southern lawyer who defends a black man accused of rape, in a scene from the 1962 movie "To Kill a Mockingbird."

One of the things I like most about being an English teacher is that I get to use literature to help kids think about life. If students make a connection with a character or with a story, they might find encouragement to get through a difficult time, or maybe a better understanding of themselves or others. I’ll never forget how a ninth grade girl once responded when I asked the class what the major theme of Romeo and Juliet was. Without hesitation, she replied, “I ain’t killin’ myself for no boy!” Though her grammar was substandard, her critical thinking certainly wasn’t.

Perhaps one of the best novels today that high school kids are reading is “To Kill a Mockingbird,” by Harper Lee. I was only 5 years old when her book was published, and we didn’t read it when I was a 10th grader in 1971, so I’m one of those people who read it as an adult. Since it is part of our standard curriculum, I got to read the book not only for enjoyment, but also as an instructional tool.

Having lived in Vicksburg, Mississippi, for six years in the 1980s, my family was surrounded by Civil War reminders, as well as shadows of the civil rights movement. Someone I knew unearthed a cannon ball when he was building his home near the Vicksburg battlefield. I used to run in the National Park, and while I was doing that, my boys would play in the wrinkled green trenches and crawl on the black iron cannons which still sit where they did during the siege of 1863. So, teaching To Kill a Mockingbird was especially meaningful to me, since I had absorbed some of the Deep South culture personally.

To learn more about the civil rights movement and how it was portrayed in literature, my wife and I participated in a seminar led by college professors one spring. On one occasion, I mentioned some situations we faced in North Carolina during integration, and someone in the group informed me that he didn’t care about what happened “up North.” Huh?

My students often like to hear stories like that and about the way things were during the 1960s and 1970s. I can’t teach without telling stories, so they’ve heard a great deal about what was going on in their own home state and hometown during that era. Even though the setting of Harper Lee’s story is a fictional town in Alabama, and the place in which we live is miles and decades apart, we always find similarities in characters and in worldviews: good and bad.

Perhaps the main lesson that students take away from reading “To Kill a Mockingbird” is the importance of seeing the world through someone else’s eyes. A black man named Tom Robinson is falsely accused of a crime and punished for something he didn’t do. He didn’t have a chance with an all-white, all-male jury. He didn’t get any justice. That’s why they need to read books about segregation and they need to talk about it. Otherwise, they’ll never understand segregation and appreciate civil rights.

Not surprisingly, many confuse the Civil War with civil rights, events separated by 100 years. Some reference the “Silver War,” while others erroneously think that Martin Luther King died freeing the slaves.

I’ve found that most kids, black and white, don’t really care much about the Civil War or segregation today, because it wasn’t a part of their upbringing, and the Hispanic kids are totally lost when we discuss those topics; however, they do connect when we discuss racism, because they have been on the receiving side of that issue’. I do know that all kids, no matter their race, watch how we as adults respond to modern day imbroglios such as how the Confederate flag should be interpreted in 2015 following the mass murders of innocent people done in the name of white supremacy. What is the lesson or theme they should take away from that? As a teacher, I know students learn from reading, but they also learn from how we as adults interpret history, as well as current events: the good and the bad.

Larry Efird, a teacher at A.L. Brown High School in Kannapolis, writes Rough Drafts on Teaching  encourage fellow teachers and give the public insight into the teaching profession.