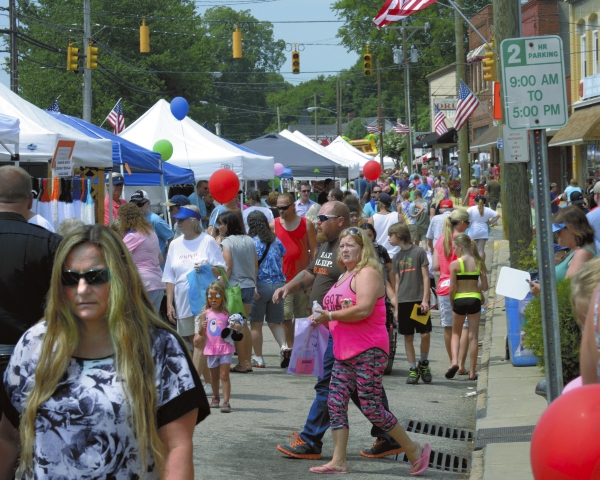 CHINA GROVE — The annual China Grove Farmers Day event has become a tradition of sorts for Maddie Ayala and her sister, Sylvia. The sisters, along with Maddie’s two children, have made it a priority to attend for the last four years. The girls make it a point to mix in a little bit of what each one wants to do before heading to a birthday party for Sylvia, 10.

The event is in its 34th year and has grown, bringing in thousands who line the streets of downtown China Grove. The event began as a way to honor local farmers by inviting them to bring their produce to sell at the farmers market. The festival is always held the third Saturday in July. Organizers and attendees half jokingly refer to it as the hottest day of the year.

The sisters made their first pit stop at the face painting booth so Sylvia could have an ice blue design matching the colors of the Disney movie, Frozen.

“We come to walk, look around,” Maddie said.

The highlight of the day for Sylvia was the face painting while her sister had to browse the craft tables. Although not crafty herself, Maddie said, she still enjoys looking at others creations.

Mayor Don Bringle estimated anywhere from 20,000 to 25,000 people will have attended the event by the end of the night. There was a steady flow of people throughout the day even with the 90 degree weather, he said.

Salem Shoquette, 14, and best friend Montgomery Smith, 13, were all about the tractors at the event. The two girls said they literally “spun every wheel” at the different vendors’ booths.

“We won stuff,” they laughed about their prizes.

The friends enjoyed going through the China Grove Fire Department’s firehouse, a small replica of a house that is filled with fake smoke to teach children about fire safety.

Although it was Salem’s first time, Montgomery said she’s attended the annual event since she was 2.

Brandon Jackson and his wife, Jennifer, attended the event with their children. The Jacksons attended for the first time and said they learned of the event through the signs throughout town and in the area. The family’s must-see activities were the food vendors and farming equipment.

Rob Carson and his wife, Leanne, brought their three children; Jac, 11, and Chase, 7, have been attending Farmers Day for four or five years and this year they brought their youngest, Emma, 19 months old. The couple split up, with Leanne and Emma perusing the food vendors and Rob and the boys checking out the fire trucks.

Rob joked that he had the most hyper of the three children.

“The best part of the day is getting out and seeing all the exhibits,” Rob said.

“Can I get in?” Jac asked a China Grove firefighter about a shiny red fire truck.

Jac joked that he was famous and jumped right back onto the fire truck. His brother, Chase, said he was also interested in the tractors on display at the event.

The family doesn’t really plan what they’ll eat at the event, they just sort of “wing it,” Rob said.

Freedom Martin brought her stepdaughters Chloe Hawotte, 6, and Elly Hawotte, 3, to the event. The girls had such a good time last year, Martin said, so they made a return trip.

Not favoring one particular vendor or activity, Martin said “we look at everything.”

One of the highlights for many at the event for children and adults was the antique tractor display. Alan Corriher began early Saturday morning setting up the tractors.

“Want to hear a story?” Leonard Deal begins to explain the history behind two of the tractors.

His father bought a tractor in September 1949 as a birthday gift for his mother. The tractor was built in Charles City, Iowa, in August 1949 and unbeknownst to his father, a neighbor, Lonnie Hinson, who lived just a short distance away, bought the same series tractor, which was manufactured days before in Charles City.

Today, those two tractors sit side-by-side at the Farmers Day event. Hinson’s tractor has seen better days and remains quite rusty, while Deal’s is painted yellow and green. The new owner of Hinson’s tractor, Mark Corriher, has decided not to restore the old tractor. The two men like explaining the story behind the tractors and displaying them together at the festival.

Attendees beat the heat for Chickweed