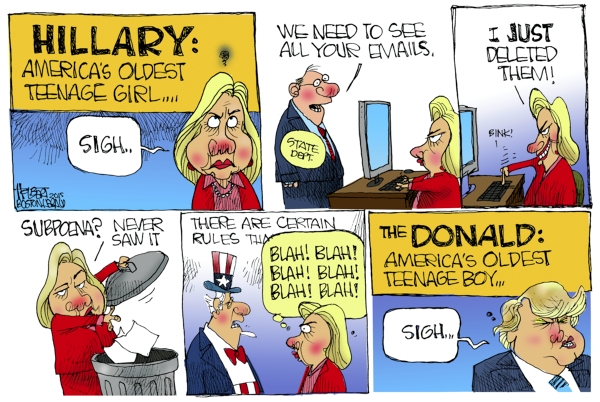 When I listen to Hillary Clinton speak, as she did Monday at The New School in New York, outlining her “economic policy” should she become president, my first reaction was not to her lack of substance and the predictability of her party line about taxing the rich more and “income inequality,” but to how boring she is.

I love definitions. They help focus the mind. But not everyone defines a word the same way.

Dictionary.com defines “bore” in several ways, all of which fit Hillary Clinton. As a verb used with an object, it says, “to weary by dullness, tedious repetition…” As a noun it is defined as “a dull, tiresome, or uncongenial person; a cause of ennui or petty annoyance.”

Even the synonyms for “bore” seem to describe Hillary Clinton: “fatigue, tire, annoy.”

She can raise her voice, as she did in her Monday speech, but that does nothing for her credibility, or sincerity. A June 2 CNN/ORC poll found that “A growing number of people say she is not honest and trustworthy (57 percent, up from 49 percent in March).” Decibel levels can’t touch that.

In an interview last week with CNN, Clinton defended herself against the public’s perception that she is not trustworthy, though when you have to attest to your integrity it reminds one of Richard Nixon’s “I am not a crook” claim during the Watergate scandal. Hillary Clinton knows about that because she was an aide to the House Judiciary Committee investigating the cover-up.

In examining her statement earlier this month that Democratic presidents, like her husband, would have paid down the national debt (she ignores the current one who has substantially increased it), Washington Post fact checker Glenn Kessler wrote, “It is certainly fair game for Hillary Clinton to compare the fiscal record of the Clinton administration with the record of the George W. Bush administration (just as Republicans like to compare Jimmy Carter to Ronald Reagan). But she goes too far to suggest that a Democrat could have preserved the surpluses and paid down the national debt, when a good chunk of that supposed (Clinton) surplus was based on a forecasting error.”

There is nothing she has accomplished that qualifies her to be president and much that ought to disqualify her. She is running primarily on her gender and the standard boilerplate Democratic Party mantra of bigger government, higher taxes and more regulations, which would result in less individual liberty. If Americans want that, they can have truckloads of it by voting for Bernie Sanders, the socialist senator from Vermont.

Clinton’s economic speech included a plan to raise middle-class income. She wants to accomplish this with another hike in the minimum wage and by use of other manipulative government techniques.

A better way would be to encourage people to make themselves more valuable to their employers by taking college classes, made possible by Pell grants, student loans, scholarships or help from nonprofits and churches, or advanced-training classes, often offered by employers, which would make them more marketable, put them in line for better positions that pay more and make it easier for them to change jobs if they hit a wage ceiling. Government might also help people secure higher-paying work in other cities and states by providing tax credits, or deductions, if they find a better job. Such a plan could also work to help the unemployed and underemployed find full-time work.

To employ a tennis term, Hillary Clinton has double-faulted. She is both uninspiring and uninteresting. To mix sports metaphors, add boring and you’d have a hockey hat trick.