Attendees beat the heat for Chickweed 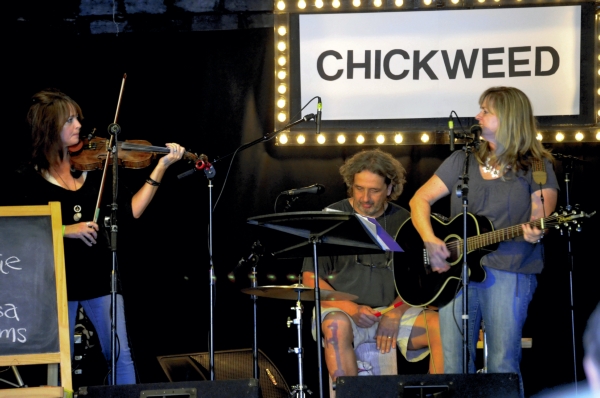 This year's Chickweed festival featured a number of performers and artists who all help raise money to benefit the Family Crisis Council's battered women's shelter. Saturday marked the fourth year for the annual indoor/outdoor festival event which was held in the Rail Walk Artists District at North Lee Street. Shavonne Walker/Salisbury Post

The early afternoon heat may have deterred a few people, but Chickweed event organizer Sue McHugh promised the event is more of an evening affair, with more and more stopping by as the sun sets and the music wafts throughout the Rail Walk Artists District on North Lee Street.

The event not only included musicians, singer, artists and poets but there was also a silent auction with guitars, artwork, gift cards and other items up for bid.

“We are trying to emphasize the positive — the strength in these women,” McHugh said.

The idea for the event was sparked by a local group of seven women, all of whom participate in the arts, dance and music scene in Salisbury. The women wanted to create an occasion to perform together, and that developed into an opportunity for an all-women revue that supports a local organization — a chance for women to help women. After beginning in 2012 as a concert, Chickweed has grown into a street festival that this year hosted events all weeklong, with an increasing number of vendors and performers.

Family Crisis Council Executive Director Renee Bradshaw said the funds raised benefit the women in the battered women’s shelter, and many of them simply feel “indestructible,” knowing others in the community care about their well-being.

“Chickweed has brought a lot of awareness of the Family Crisis Council throughout Rowan County,” she said.

The board of directors and Family Crisis staff extend their deepest gratitude and extreme love, Bradshaw said.

Dora Mbuwayesango is a board member for the Family Crisis Council and attended Saturday’s event for the second time.

“Last year I enjoyed it,” she said, so she returned.

“It’s for a good cause and the music is wonderful,” Mbuwayesango said.

She said the event is something needed in Salisbury and raises much needed funds for the Family Crisis Council.

Friends Erin Basinger and Leah Thompson attended the event for the first time. Thompson was invited by Basinger, who wanted to support a musician who was playing during the event.

“I love it. It’s a very good cause and there’s great vendors,” Basinger said.

The women set up a booth at the edge of North Lee Street where they offered massages in one of two chairs.

Diane Overcash strolled through North Lee Street stopping at a few vendors along the way. It was her first time attending Chickweed. Friend Sue McHugh told Overcash of the event.

“It’s wonderful, walking around looking at booths, and the music is fantastic,” Overcash said.

She was enjoying the variety of artists and activities at the indoor/outdoor festival.

“My main thing is the music,” Overcash said.