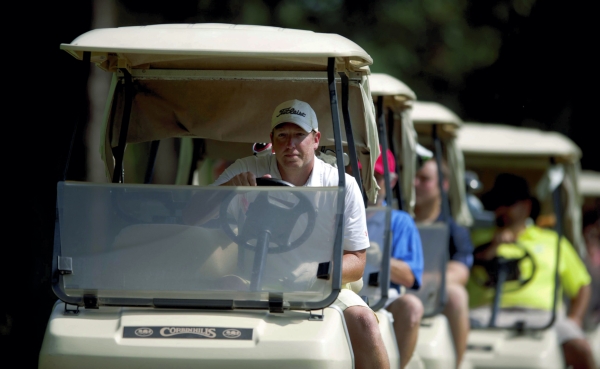 SALISBURY — It was a good day for defending champion Eric Mulkey and medalist Ryan Honeycutt in the opening round of the Horace Billings Rowan Amateur golf tournament Friday at Corbin Hills Golf Club. In fact it was a good opening day for almost all of the higher seeds in the 37th annual match play event.

But a lot of the interest and intrigue of the first day focused on two of the most veteran and successful local golfers in the event. Between them, they have won 10 of the Rowan Amateur tournaments over the years and represent over about a century of golf experience. By qualifying score and by chance, Randy Bingham, 64, and Gary Miller, 60, ended up playing each other, and they made sure it was a dramatic match throughout.

Miller, a six-time champion, edged Bingham, a four-time winner, 1 up, on the 18th hole when both scored a par. Miller had been two up with two to play but Bingham birdied 17 to keep the pressure on. It was a fitting end to a close match between two men who recall playing in the very first Rowan Amateur back in 1979, and have missed no more than a couple of these events since then.

“It was a lot of fun to play with someone almost my age,” Bingham said with a smile afterwards, “but I tell you, youth always wins. Of course, I could say that about anyone I played in this tournament.”

Miller now will square off against eighth-seeded Kevin Lentz in the next round. Lentz won the first four holes of his Friday match and went on to defeat Derek Overcash, 6 and 4. “All in all, I was happy with the way I played,” Lentz said, while also noting it was special to be in the same foursome with Bingham and Miller and watch them battle throughout.

Defending champion Eric Mulkey won his opening match of the tournament over Murphy Beard, 5 and 3, but also took time to admire the play of Bingham and Miller.

“I called it the legends match,” Mulkey said. “I have the utmost respect for both of those men and it was a unique situation to have that many championships represented in one pairing.”

As for his own first day match, Mulkey prevailed, despite some putting woes. As defending champion, he did not have to qualify, which suited him just fine. “I feel very relaxed,” he said. “I have the experience now of having won one of these and I know what it takes to win.”

Mulkey will now move on to face his longtime friend Shane Benfield in the round of 16 Saturday morning. Benfield posted an impressive 3-under score and defeated talented high school player Christopher Queen, 5 and 4.

Ryan Honeycutt, the tournament medalist with a qualifying 69, had to get himself out of several jams during his round Friday, but still was able to get past former West Rowan star athlete Chris Hassard, 5 & 4. Honeycutt has won this tournament three times, including his first one back in 1997 as a high school junior. Honeycutt admits he has grown up playing in the Amateur. “But no, I am not a better player now than I was then, ” he said. “I played a lot more back then than I do now. But I will definitely have to play better tomorrow.”

Honeycutt now squares off against 2013 champion Andrew Morgan, who edged out veteran golfer Jon Post, 4 and 3. Morgan posted several birdies but his shot of the day was a 90-foot chip shot on the 13th that holed out for an eagle. “In this tournament, you have to play well but you also have to get a little lucky,” Morgan noted. “But this is a great event.”

Based on seeding, there was one major upset on opening day as 30th seed Tyler Mulkey, brother of defending champion Eric,  surprised the third seed and East Rowan star golfer Logan Shuping, 3 and 2. He will now face veteran golfer George Benfield, who edged out another East Rowan golfer, Ben Rollins, 2 and 1.

Fourth-seeded Keith Dorsett,  a two-time winner of the event, survived some errant shots and a strong challenge from Joe Cress to win 2 and 1. “I gave him some holes, but he also played well.” Dorsett said. “But I sure have to play better tomorrow to get through.”

In other first round matches, Sean Kramer downed Mike Marlowe, 4 and 2, and will advance to play Derek Lipe, a 4 and 3 winner over Andy Lombard.  Recent Salisbury High grad Abraham Post defeated Jason Barnhardt, 5 and 4, and now will face Brad Vinson, a 2-up winner over Chace Jensen.

Lurking in the background, ready to make a move, is sixth-seeded Nick Lyerly, last year’s Rowan Amateur runner up,  a state champion golfer at East Rowan High this past spring and one of the top junior golfers in the state. “I played pretty consistently today,” Lyerly said of his 5 and 4 win over Curt Thomas. “I had one bogey on 10 when I three-putted, but I also had three birdies. It was a good round.” He will now face Dwayne McIntyre, a 2 and 1 winner over Carl Moore.

The round of 16 match-ups in the tournament began shortly after 8 a.m. this morning at Corbin Hills Golf Club, with the quarterfinals set for Saturday afternoon. Semifinals will be Sunday morning and the two finalists will square off Sunday afternoon for the championship.

See today’s scoreboard page (2C) for the first round results and second round pairings.