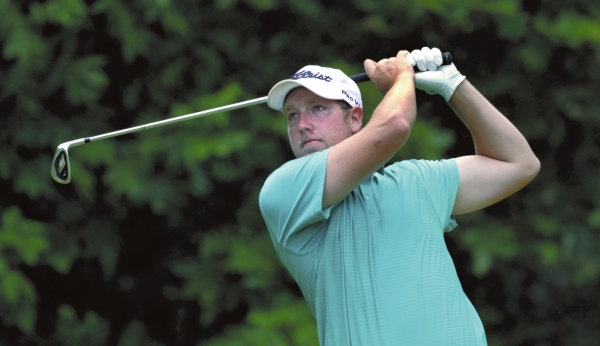 SALISBURY — The defending champion has his work cut out for him.

If top-seeded Eric Mulkey is to prevail in the Horace Billings Rowan Amateur Golf Tournament, he’ll need to show more consistency than he did Saturday at Corbin Hills.

“I played one of my best rounds ever this morning and was just drained this afternoon,” Mulkey said after qualifying for this morning’s semifinals, along with Derek Lipe, Andrew Morgan and Nick Lyerly. “It was me at my best and me at my worst.”

Mulkey shot a 65 and made five birdies and an eagle to beat Shane Benfield 2-up in the morning session. After lunch he struggled to edge veteran Gary Miller, 1-up.

“Shane took a lot out of me,” Mulkey said afterward. “When you shoot 7-under (par) and still have to go 18 holes, that drains you.”

Miller, a six-time champion, carded an eagle the 18th hole to force a playoff. Mulkey advanced when he sank a two-foot putt for par on the first extra hole. He’ll face Lipe, a 26-year old from China Grove, in the semifinals. A victory there would match him against 2013 champion Morgan and his glow-in-the-dark putter or the 16-year old Lyerly, a rising senior at East Rowan and a state champion.

Lipe, the No. 12 seed, will make his first Sunday appearance in the tournament after ousting Sean Kramer 2 and 1 in the round of 16 and Jon Waller, 5 and 4, in the quarterfinals. He played a steady round — two birdies, no bogeys and 2-under par for 14 holes — to reach the semifinals.

“I played to the center of the green and tried to make putts from there,” he said. “It worked. I never trailed in either match today.”

He welcomes the opportunity to face Mulkey. “I’m just gonna do what I can,” he explained. “He’s the guy to beat, for sure. But I like being the underdog.”

Morgan, a 2003 South Rowan graduate, is the favorite for the Mind-Over-Matter Award after upsetting medalist Ryan Honeycutt, 1-up, in the morning round and seventh-seeded Abraham Post, 4 and 2, in the quarterfinals.

“I’m tired,” the 15th-seed Morgan indicated. “It’s been a battle, a real struggle all day long.”

Morgan found himself three holes down after seven against No. 2 Honeycutt, a three-time champion. “I finally pulled even and then eagled 18 to win it,” he said. “But nothing was easy.”

Against Post, Morgan survived an intense, see-saw scrap. He was two-up after three holes, but even after nine. When the rains came at No. 11, he sliced his tee shot into the woods along the left perimeter and wound up with a double bogey, giving Post his first lead.

“I’d been hitting a little left-to-right consistently all day,” Morgan noted. “For some reason my shot went left on 11. It was the only shot I hit that went left all day.”

Morgan’s turnaround began when he birdied the par-4 12th hole and drained a 12-footer to birdie the par-3 13th. His par on 14 gave him three straight holes and a two-hole lead. “After going one down,” he said with a post-match grin, “it was key to get right back in it.”

Morgan secured victory with another birdie on 15, giving him three over the final four holes. “That got me back in control,” he said.

Lyerly is the wild card in the semifinals, the No. 6 seed and last summer’s runnerup. He routed Dwayne McIntyre, 7 and 6, in the second round and stopped 62-year-old George Benfield, 5 and 4, in the quarterfinals.

“This is my home course so I know it very well,” Lyerly said. “It also helps to go out and win the first two holes. I just hit the fairways, hit the greens and never got myself into trouble.”

Benfield did on the worrisome eighth hole, a 408-yard, par-4 challenge with thick shrubbery and a narrow creek just yards from the green. His approach shot disappeared into the thicket and never was found, forcing him to take a penalty stroke. “Still, George played well today,” Lyerly said. “He deserved better.”

Lyerly finished with five birdies — after making six against McIntyre — and was 4-under for 15 holes. He’s been under par in all three rounds and sees his semifinal match with Morgan as a chance at redemption.

“The year he won this, he beat me in the second round,” Lyerly said. “But if I play solid like I did today and (Friday), it could be a tough match for him. If I don’t give him anything, I’ll at least make it a good match.”