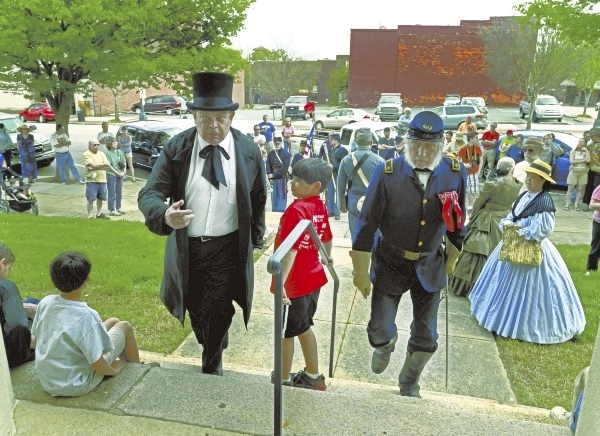 The Rowan Museum is having Civil War reenactors on its grounds this weekend as a culmination of a Civil War History Camp. Here is more on how museum officials view this event and its importance to understanding the war on both sides.

There has been a call for a time and place to discuss events surrounding the Civil War, flags, monuments and their place in modern society.

This weekend, from 10-4 p.m. on Saturday and from 1-4 p.m. Sunday, the Rowan Museum will take the lead in opening those discussions.

The Civil War, The War of Northern Aggression, The War for Southern Independence or various other titles was fought from 1861-1865. It took the lives of over 600,000 Americans.

If you could ask soldiers why they went off to war, the responses would be as varied as the soldiers you asked. “It was states’ rights, it was to save the Union, it was to end slavery, it was to maintain a cultural way of live, I was drafted, the Home Guard forced me to enlist, or my neighbors expected me to go.”

But the biggest reason actually turned out to be emotional. Whatever their reason, it became personal and emotional to each soldier. The political leaders of the country became so emotionally involved in the issues of the day that their only option for trying to solve them was to send men off to war. The parts of the country had different views of life, refused to work out solutions and blamed the the other side for not understanding.

Therefore, the Rowan Museum has decided to bring reenactors from both Civil War armies to its lawn for two days of discussions. The reenactors live in the time period of 1861-1865. They don’t live in the 1940s to the present. The Civil War was fought for four bloody years but it ended. The war stopped. The Southern generals told their men it was over, to furl their flags and surrender.

The soldiers were discharged with an oath of allegiance and told to go home. They went back to their families to start over. Yet, many never got that chance because they died away from their homes and families. Our National Cemetery holds the most unknown dead of any national cemetery in the United States.

The blood-stained war flags were put away with a promise never to be unfurled for war again. Those flags had served a purpose and they were done. They became history.

The blood, sweat, tears and hopes of all of our families have helped form our county. We fought for independence. That was our first “civil war.” Neighbors fought neighbors as Tories and Patriots.

Then the smell of war came again. It brought a prison with its smells of death and hardship.

The smell of sweat of the women left behind to farm while their husbands were away fighting.

The smell of slave and freedmen’s sweat in the fields and shops of our town was left behind after their labor.

The smell of burning as our town was raided and war supplies burned.

Then, along with the rest of the nation, Rowan County could not accept the fact that all men and women were created equal. Separate but equal was the law of the land and the races were divided — to the point that Americans could not drink from the same water fountains.

Groups of folks shamed our Civil War ancestors by using their battle flags as a symbol of hatred and segregation. “Dixiecrats,” the KKK and others shamed the honor of the brave men who fought under those banners. If you are the descendant of one of these brave men, Northern or Southern, you should not let your ancestor be so insulted. Honor your personal history but do not put your ancestor under a new banner that was not his or hers.

Remember, museums house history. If you want to view that time period, visit a museum. Our own hearts and minds are where we house either hate or love, and symbols of the past that are altered for present feelings are unacceptable.

If you come to see the reenactors, don’t bring your 21st century symbols, because they won’t understand why you are carrying their flags.

The worst of Donald Trump, the celebrity-billionaire-turned-presidential-candidate, was on full display this past weekend during rambling rants on immigration, media... read more