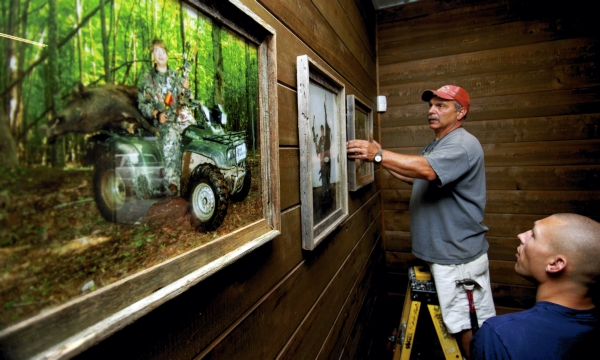 JON C. LAKEY / SALISBURY POST Frank Brady and Caleb Srackangast hang several photographs of Sonya Graham on the new walls of S & S Graham Archery in China Grove on Thursday. After three years, the business has returned to the original building that was destroyed by fire, claiming the life of co-owner Sonya Graham.

CHINA GROVE — After rising from the ashes of a fatal fire, Sionna Graham’s emotional journey to rebuild her family business is nearly complete.

Three years ago, Graham’s twin sister Sonya was killed when chemical vapors ignited, exploded and created a fire that consumed S & S Graham Archery near China Grove. At the time, Sonya was using acetone as part of a taxidermy process. The vapors built up in a small bathroom, ignited the pilot light of a water heater and destroyed the building.

“It mushroomed in the back room because the fumes had built up,” Sionna said. “The whole thing just went up in flames in a matter of seconds.”

She said the store’s staff tried to use a fire extinguisher to put out the blaze, but it was a chemical fire. The extinguisher didn’t help.

“We shared such a bond that is hard to even explain,” she said. “We went to high school together, college together and opened a business together. We suffered the same ups and downs together and fed off of each other.”

At one point following the fire, Sionna said, she was ready to give up. She didn’t plan to reopen the store.

But the community wouldn’t allow it.

Support came pouring in. Community members donated their time and money toward helping to reopen the store. As a result, S & S Graham Archery soon after the fire opened in a temporary space near their original facility, north of China Grove on U.S. 29.

Sionna said World War II letters from her father Buddy Graham also helped significantly to overcome her emotions. More than 100 letters from her father were included a box that also held medals and memorabilia from the war. During World War II, Buddy Graham was knocked unconscious by artillery fire, his legs were frozen because of frigid weather and he was unable to walk for weeks.

“It meant so much for my aunt to bring me the letters,” she said. “Reading the letters showed me that he was able to get through it all, and it really helped. In the letters, not one time did he say anything negative.”

After two years of work, and an immeasurable amount of community support, Sionna said the store on Saturday at 10 a.m. will have a grand opening at its original facility — 1700 N. Main St. She easily rattled off a dozen or more people who were instrumental in making the reopening possible.

“There are so many people that have given their stuff and their time,” she said. “It’s only through love and community support that this is possible.”

The building is about 450 square feet larger than its predecessor, and three reminders of Sonya hang near the front of the building — pictures of a hunt Sonya went on in 2000. The pictures sit in the same spot where Sonya Graham died as a result of the explosion and ensuing fire. A picture of Buddy Graham will hang next to the pictures of Sonya.

“It’s not about asking why it all happened, but what now,” Sionna said. “Without my faith and all of the prayer, I couldn’t overcome it. It was hard for me to come here.”

The pair planned to get degrees in nursing, but Sonya suggested they open an archery shop. Sionna agreed, so they switched their major to business administration.

The current building is the same one the pair of sisters opened in 1989. Sionna said they agreed on the day after college graduation from the University of North Carolina at Charlotte that it was the perfect site for S & S Graham Archery. The building was formerly a cabinet shop.

S & S Graham Archery opened in 1989 on the anniversary of Buddy Graham’s death. Its official grand re-opening is just over three years after Sonya Graham died. S & S Graham Archery has been operating out of the remodeled building for the previous month. Work to wrap up the building’s interior continued this week, and was nearly complete on Thursday.

The grand re-opening will include a number of vendors, raffles for the store’s merchandise and pizza.