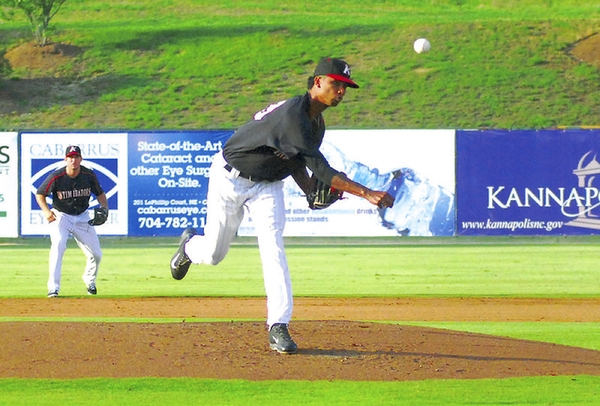 KANNAPOLIS — Manager Tommy Thompson’s spirited, ninth-inning argument over a questionable call at first base was the most excitement the Kannapolis Intimidators generated in Thursday’s quiet 3-1 loss to visiting Lakewood.
“A clean game but a tough loss for us,” Thompson said. “Tip your hat to their pitchers — and their third baseman and their shortstop and their second baseman. They made some outstanding plays.”
Lakewood (45-44) was flawless defensively, got a sensational start from 6-foot-4, 245-pound lefty Austin Davis and was luckier than the Intimidators (45-45), who managed only three hits.
Lakewood’s two-run sixth against Kannapolis starter Luis Martinez proved decisive. There was a walk followed by three straight singles — a chopper that bounded over the head and off the outstretched glove of Intimidators third baseman John Ziznewski, a line single a foot beyond Ziznewski’s reach and a two-run, opposite-field single that Cord Sandberg muscled into right field.
“That hit that scored two runs came on a good pitch,” Thompson said. “Martinez jammed him, but he was strong enough to get it over the infield and he kept the ball fair. Baseball is a game of inches and angles, and he hit it to a spot where we couldn’t defend it.”
Lakewood led 1-0 after about 10 seconds when leadoff man Herlis Rodriguez took Martinez deep to right field to start the game. After that initial mishap, Martinez was impressive until he was unfortunate in the sixth.
“He attacked,” Kannapolis shortstop Eddy Alvarez said. “He’s been really good at that the last month.”
Kannapolis successfully scrapped for a 1-1 tie in the bottom of the first. The key was a steal of third base by Alvarez, and Michael Suiter cruised into second to make it a double steal.
“I’ve got a green light if I think I can make it and I took off,” said Alvarez, who has 42 stolen bases in his first full season of baseball. “It was close at third, but it was an aggressive move that gave our middle-of-the-order guys a chance to drive in a run.”
Alexander Simon’s groundout to the right side plated Alvarez, but the Intimidators didn’t score again. Davis was very tough.
“He commanded the strike zone and his changeup was very good, and when a pitcher is throwing his off-speed stuff for strikes, he can be dominant,” Alvarez said.
Kannapolis relievers Jose Brito and Matt Cooper, who fanned the side in the top of the ninth, had positive outings and gave the Intimidators a chance to come back.
Kannapolis tried, but Lakewood shortstop Drew Stankiewicz made two remarkable plays to get the first two outs in the ninth before Ryan Leonards smacked a double. Then closer Joey DeNato struck out Ziznewski swinging to end the game.
“We had plenty of opportunities,” Thompson said. “We just couldn’t do anything.”
Kannapolis starts a series with Hagerstown on Friday.
•
NOTES: Many fans took advantage of a jersey night promotion, with football jerseys dominating the crowd.