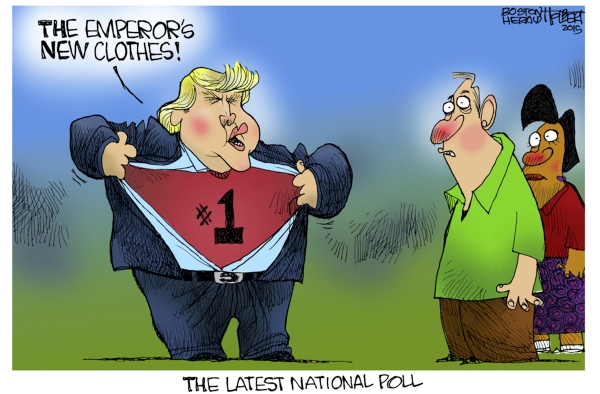 Donald Trump is part of a long and shameful tradition in American politics. Our history is full of cynical and vicious demagogues who exploit the fears and frustrations of voters by blaming foreigners for all of our problems.

This is a profoundly unfair and unfounded view, but as Trump’s cheering crowds and rising poll numbers attest, it’s a mindset shared by a significant slice of the electorate.

Trump wildly exaggerates when he claims to speak for a “silent majority” of Americans. A poll last February by the Public Religion Research Institute found 58 percent agreeing with the statement, “immigrants today strengthen our country because of their hard work and talents.”

But that leaves 31 percent to share the Trumpian view that “immigrants today are a burden on our country because they take our jobs, housing and health care.”

In truth, Americans have always been deeply ambivalent on the subject of immigration. We glorify our own foreign-born ancestors and tear up at images of the Statue of Liberty and Ellis Island.

But a competing view lurks just below the surface, a deep-seated suspicion of any alien influx and influence. Change the Mexico in Trump’s tirade to Ireland or Italy, Japan or China, and you can hear the same xenophobic echoes since the beginning of the America is now finished and perfected, goes this argument, and the next wave of newcomers will dilute and diminish our national character.

Take just one example, which Steve quotes in his book “From Every End of This Earth”: “In 1753, Ben Franklin called the Germans flocking to Pennsylvania ‘generally the most stupid sort of their own nation’ and warned: ‘They will soon outnumber us (and we) will not, in my opinion, be able to preserve our language, and even our government will become precarious.”

It’s also true, however, that in each period of national panic, courageous voices have challenged and confronted the “haters.” Take Ralph Carr, governor of Colorado in the early 1940s. He urged state residents to welcome Japanese-Americans who had been forced from their homes on the West Coast and resettled in i

“An American citizen of Japanese descent has the same rights as any other citizen,” he told one hostile crowd. “If you harm them, you must first harm me.”

That stance cost Carr his political career, but today there is a statue of him in Denver honoring his legacy of compassion.

Some Republicans, like Texas Sen. Ted Cruz, have joined Trump’s sordid strategy of pandering to anti-immigrant instincts, but others have bravely stepped forward to denounce his insidious campaign.

“If we do not reject this way of thinking — clearly, without any ambiguity — we will have lost our way,” South Carolina Sen. Lindsay Graham, a candidate for the Republican nomination, said on CNN. “We will have lost our moral authority in my view to govern this great nation.”

Graham has talked often about the “demographic death spiral” facing the GOP if it does not reach out to Americans of color, especially the rising tide of Latino and Asian immigrants. In 1980, when Ronald Reagan won his first term, the electorate was 88 percent white. Next year, it will be down to 70 percent white, and remember, Mitt Romney won a higher percentage of the white vote than Reagan did and still lost decisively.

Trump’s tantrum might even backfire by magnifying the Hispanic turnout. “The silver lining is it wakes people up and makes them more likely to vote,” says Housing Secretary Julian Castro.

GOP pollster Whit Ayres sums up the problem facing his party: “Republicans can complain about these trends, wring their hands over them and get heartburn as a result. What they can’t do is change them.”

Nor can Republicans change the lesson of history. All those immigrant groups that were vilified in their time as un-American now contribute every day to the vitality and vibrancy of this great and diverse country.

Haters like Trump reflect an undeniable part of our history. But they have always been wrong, and they are wrong again today.

Steve and Cokie Roberts write for Universal UClick. They can be contacted by email at stevecokie@gmail.com.