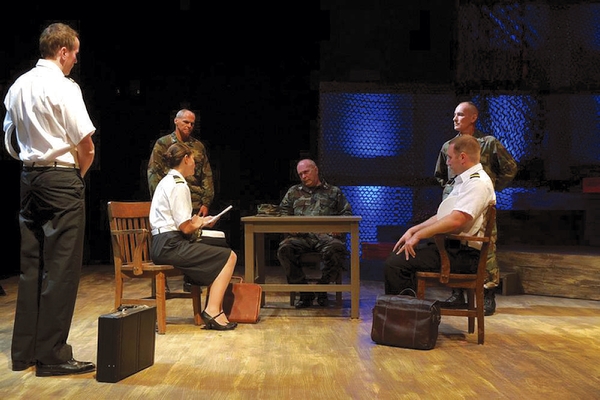 ‘A Few Good Men’ showcases a lot of good acting

It’s unlikely you will see a more powerful performance this summer than “A Few Good Men” at Lee Street theatre.

An excellent cast manages to keep the tone serious in the right measure, with the occasional laugh to relieve tension.

The story is about the death of a young Marine, PFC William Santiago, and the trial of two fellow Marines implicated in the tragedy.

And it is Lee Street’s Managing Artistic Director Justin Dionne who has the largest part as Lt. J.G. Daniel Kaffee. He carries the role extremely well, showing Kaffee’s conversion from a bored lawyer just waiting to get out of the Navy to a man who is passionate about the truth, no matter what Lt. Col. Nathan Jessup says.

Bob Paolino has the juicy role of Jessup, the guy who utters the line made famous by Jack Nicholson in the movie: “You can’t handle the truth.”

Paolino’s Jessup may not be as menacing as Nicholson (who is?), but he’s a special kind of nut job and Paolino’s performance is entirely compelling, especially in the last intense moment of the trial.

Jon Planovsky, who happens to be one of the nicest people you’ll ever meet, is fierce as wacko Lt. Jonathan James Kendrick, the Bible quoting Marine zealot. Planovsky’s eyes tell the whole story, as his intense glare slays all he feels are beneath him and his code.

On the calmer side, Tim Hager is just right as Lt. J.G. Sam Weinberg, Kaffee’s second. Hager plays nonchalance, then concern, then distress, but he’s always steady, and is a sort of anchor for Kaffee.

Jessica Walker plays Lt. Cmdr. Joanne Galloway, an eager, if not practiced, lawyer with internal affairs. She has so little trial experience, it’s laughable when she’s assigned to the cases of Lance Cpl. Harold W. Dawson and PFC Louden Downey, both accused of murdering Santiago.

Walker handles the role well — she has to act tough, passionate and driven, despite her youth and inexperience.

Anthony Cataldo, a regular in Norvell Theatre shows, is now in college studying drama. Again, he’s Mr. Nice Guy, but in “A Few Good Men” he embodies the intense, fiercely dedicated Marine who would rather go to jail than betray his oath and his leader. The emotions that play across his face are deeply felt. Alex Thompson is the quiet, naive Downey, who’s in way too deep and looks to Dawson for direction.

Matthew Monte seems born to play Lt. Jack Ross, the prosecutor. He has intensity, confidence and hubris as his case unfolds. Monte is completely comfortable onstage.

Doug Stauter has the tough role of Capt. Matthew Markinson, a lifetime Marine who is appalled at the behavior of Jessup and Kendrick, conflicted beyond tolerance. He feels solely responsible for Santiago’s death.

Ed Whitney, now a regular on Salisbury stages, plays Cmdr. Walter Stone, the physician Jessup pushes to lie about Santiago’s cause of death. Watching him fall apart on the stand is a moving moment. All these officers know their careers are blown if the truth comes out.

The remainder of the cast, Joe Campola, William Osborne and Chuck Riordan, fill multiple roles, all while maintaining a military stance and presence.

The entire cast, indeed, is consumed by their parts. No one is out of step, and the military cadence and marching guided by Assistant Director Lara Williams maintains the serious atmosphere.

Director Craig Kolkebeck, who deserves praise for this tight production, turned to another expert for help in the uniforms — Anvil Arms: Luther Sowers and Allen Jones — so that there was no sloppiness in the dress.

Kolkebeck and Chris Speer designed the militaristic set, camouflage and red and blue, so that it serves well as a Washington courtroom, jail cell and headquarters at Guatanomo Bay, Cuba.

This play is too intense for children, but suitable for teenagers, who have already heard similar rough language. The play runs two hours and 45 minutes, with a 15-minute intermission, but the time passes quickly as the audience will be caught up in this excellent production.

CENTENNIAL, Colo. (AP) — Families of the 12 people James Holmes killed and the scores he injured in a packed... read more