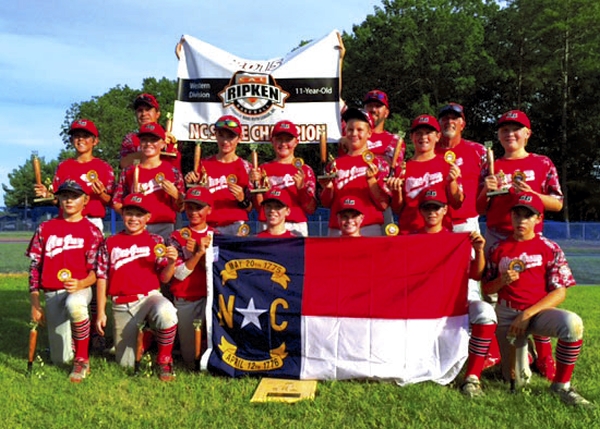 It came down to a pair of teams from Rowan County in the battle for the Cal Ripken Baseball Western Division State Championship in the 11-and-under age group. East Rowan and China Grove, after already duking it out for the area championship, settled who was the best in a best-of-three series.

It turned out to be China Grove. The team won the first game 12-8 on Sunday to gain the edge. East Rowan found itself down 11-1 and on the verge of being mercy-ruled before a barrage of four home runs — three of them solo — cut into that lead. China Grove, however, closed it out.

The second game was tied 6-6 through five innings when it was halted by lightning. The teams came back Tuesday to finish the game. China Grove was able to tack on a couple of runs to earn the 8-6 victory and the title.

It wasn’t much of a surprise to East Rowan coach Justin Kepley to see his Rowan counterpart in the championship series.

“It was one of things where we played those guys in the area tournament and, more or less, we figured it would be between us and them,” Kepley said.

Regardless of who won the series, both teams already earned berths into the Southeast Regional tournament, which takes place in Stafford, Virginia.

Fourteen teams are divided into two pools — with two divisions each — at the regional tournament. China Grove is in the American pool while East Rowan is in the National pool. Four teams from each pool advance to a single-elimination tournament with the American teams on one side of the bracket and the National on the other.

The only time East Rowan and China Grove could meet is the championship game. That’s something that wouldn’t catch Kepley off guard at all.

“It wouldn’t surprise me, seeing those guys, if it comes down to us two in the regional tournament,” he said.

The teams are slated to hit the road to Virginia on Tuesday. There is an opening ceremony that night, and tournament play opens Wednesday. The elimination rounds start July 24.

Getting up to Virginia presents a problem financially. Chrismon estimated it could cost up to $5,000 just for hotels for the teams and their families.

Both teams are trying to raise funds to make the road trip to the town between Richmond and Washington, D.C.

Kepley’s crew — which draws from Granite Quarry, Rockwell and Faith — will post its banner in downtown Faith taking collections from those in the area. Chrismon and his squad will have a booth Saturday at the annual Farmers Day Festival taking donations.

“I think it’s a great representation of the kids and the community and the county to have such good youth baseball being played,” Chrismon said. “You can look at all the age levels, but to have one division with good baseball, [it shows] all the kids are really talented and work really hard.”