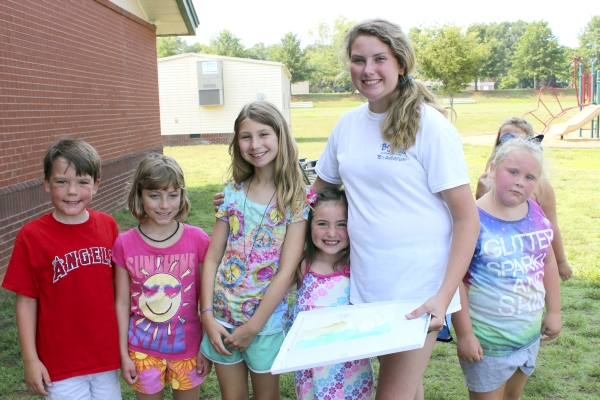 At Salisbury Academy, there is more to being an upperclassman than knowing your way around and being one of the tallest kids in the hallway. Older students serve as mentors to younger students – from 4-year-olds on up – and demonstrate both the power of learning and how students should treat one another.

“This is one of the benefits of a JK-8 community,” said Head of School Beverly Fowler. “The middle school students serve as positive role models for younger students in meaningful contexts, giving them a sense of responsibility and leadership opportunities.”

At Salisbury Academy, the role modeling continues all year round, even during the summer months.

Take Bunny Showfety, for example. A recent graduate of Salisbury Academy and rising freshman at Gray Stone Day School, Showfety helped last week with the Mad Scientists summer camp, and before that with an art camp at the school, doing everything from assisting with projects to washing the messy hands of young artists and experimenters.

“As a student here it felt like family. I’ve known all the little kids since junior kindergarten,” said Showfety, who is 14. “I just thought I should help out.”

Over the course of the school year, Showfety, who was awarded the citizenship award by her peers this past year, made a point of popping her head into the fifth-grade classroom at the start of every school day to wish them a good morning. This is the same kind of interest and attention that she received from older students when she was younger, she said.

“I’d say, ‘I want to be just like them,’ ” said Showfety. “Now that I’m older, I want to help kids in that way, to show them how to have a good attitude.”

“Those mentors really helped me,” said Dees. “It showed me that they really cared if we improved at basketball.”

Following in line with his predecessors, Dees is now one of the older students assisting Coach Antwaun Thompson at Salisbury Academy’s basketball summer camp. Through his volunteering, Dees hopes to boost the confidence of basketball campers, much in the same way that his mentors and coach have done for him.

“Today we showed them some lay-up drills and ball-handling drills that they can do at home,” he said. “I’m hoping that they go home and work on it.”

Off the court, Salisbury Academy’s focus on student mentoring involves cross-disciplinary activities among grades, like last year’s unit on cardio health. First-graders were introduced to the circulatory system, while at the same time fourth-graders built models of the heart for the younger kids to experience the functions of the heart chambers, vessels and blood cells.

In addition to integrating academic lessons among grades and pairing classes for experiential field trips and enhancements, the school has a buddy program, where eighth-grade students are paired with junior kindergartners. The students have opportunities throughout the year to build the relationships with their buddies through activities such as community service projects, reading, holiday celebrations and times for play.

“The beauty of this partnership is watching the relationships that form throughout the year, and watching the students become comfortable with each other,” said Sandy Jordan, junior kindergarten teacher for Salisbury Academy. “Additionally, it creates a level of comfort and sense of community for our youngest learners.”

For Dees, he has big expectations for himself and his fellow eighth-graders in the examples they will set for younger students this year.

“I want to show them that academics are a priority over sports and other things, and to show them how to lead by example,” said Dees.

And beyond the walls of Salisbury Academy, Showfety sees the lessons learned in role modeling as ones that will carry into her next phase of life: high school.

“High school will be a challenge,” Showfety said. “I will look up to the juniors and seniors. When I reach their age, I’ll try to do what I’ve done here — to treat everybody like family.”

By Haleigh Barnhardt Special to the Post On June 24, 2015, I embarked on the trip of a lifetime. I... read more