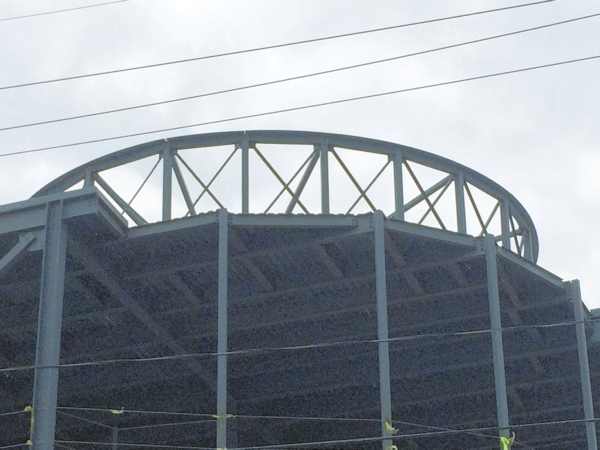 The school board received a donation for the dome on the new central office, called the Wallace Educational Forum. jeanie groh/salisbury post

If Rowan-Salisbury’s Board of Education cannot raise $320,000 over the next two weeks, the district’s new central office will have to go without a dome. The only problem is that the structural steel for the structure is already in place.

The school board met Wednesday afternoon to discuss its strange predicament. The board received a $60,000 donation to go toward the dome’s construction – less than 20 percent of the dome’s total cost of $380,193.

The dome was initially intended to be an alternate add-on, and the board would raise money to cover the cost. When construction began, however, the dome was added to the building without board approval.

While the $60,000 donation was used to pay for the structural steel that now protrudes from the building’s roof, no funds have been raised for the remainder of the project.

Now, Barnhill Contracting company is at a point where it needs to know what to do next. In fact, the board has only two weeks to make a final decision.

Chairman Josh Wagner said last week was the first time he heard about the issue.

“I was just a little surprised and disappointed,” he said. “I think we should have had an opportunity as a board to analyze this before spending money on the steel.”

“For us to continue, it’s going to require more money,” he said. “Moving forward, decisions are going to be made differently.”

Those options include leaving the structural steel as is, wrapping it with finish product and continuing with dome construction.

The second option would be to wrap the steel with finish product, which would essentially create a decorative, non-weight bearing wall to cover up the steel. This would cost $205,000 – $55,000 for roofing and $150,00 for the wrap.

The final option is to continue with dome construction, which calls for $320,000 more to be raised.

“We want to see which direction the board wants us to go,” Vann said.

Board member Susan Cox asked if the steel could be left exposed and painted in a way that makes it look intentional. She suggested using different color paints to make it more decorative.

Ultimately, she moved to spend the next two weeks fundraising, to work toward raising the $320,000. If that goal is not reached in its entirety by Aug. 1, however, the steel should be painted, to be as “aesthetically pleasing as possible.”

The motion was unanimously passed by the five board members in attendance. Chuck Hughes and Dr. Richard Miller were not in attendance.