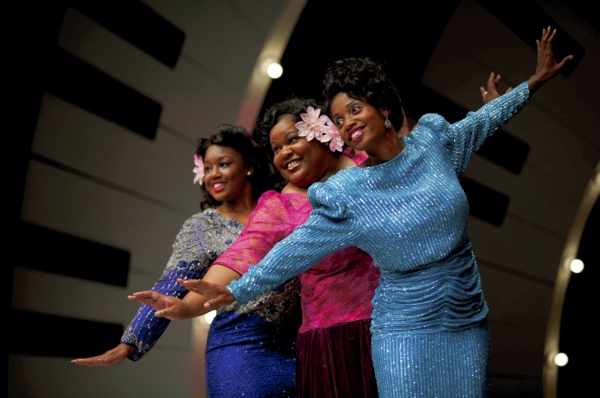 Ain’t Misbehavin’ is a musical revue named after the Fats Waller song of the same name, with a book by Murray Horwitz and Richard Maltby, Jr., and music by Thomas “Fats” Waller and other various composers and lyricists.  One of the most popular, well-crafted revues of all time, Ain’t Misbehavin’ won the 1978 Tony Award for Best Musical, becoming the first revue in history to receive the honor.

The inimitable Thomas “Fats” Waller rose to international fame during the Golden Age of the Cotton Club and that jumpin’ new beat, Swing. Although not quite a biography, Ain’t Misbehavin’ evokes the delightful humor and infectious energy of this American original as a versatile cast struts, strums and sings the songs he made famous in a career that ranged from uptown clubs to downtown Tin Pan Alley to Hollywood and concert stages in the U.S., Canada and Europe.

The musical is a tribute to the black musicians of the 1920s and ’30s who were part of the Harlem Renaissance, an era of growing creativity, cultural awareness, and ethnic pride. It was a time when Manhattan nightclubs like the Cotton Club and the Savoy Ballroom were the playgrounds of high society and Lenox Avenue dives were filled with piano players banging out a new beat.

Frank Rich, in his review for The New York Times, wrote “… Though almost bereft of dialogue, this musical anthology expands beyond its form to become a resurrection of a great black artist’s soul. Perhaps the key to the musical’s approach, as conceived by the director Richard Maltby Jr., is its willingness to let Waller speak simply and eloquently for himself, through his art but without show-biz embroidery.”

On June 12, 1982, NBC broadcast the revue with the original Broadway cast, receiving 8 Primetime Emmy nominations and winning 2 of the awards. A Broadway revival with the same director, choreographer, and cast as the original production opened in 1988 and ran for 176 performances earning a Tony nomination for Best Revival of a Musical.

“The show moves with the zing and sparkle of a Waller recording-filled with bright melodies and asides.” –The New York Times

“Ain’t Misbehavin’…is like an intoxicating combination of a dry martini and a dirty joke, savored over the sassiest Depression-era jazz.” -LA Times