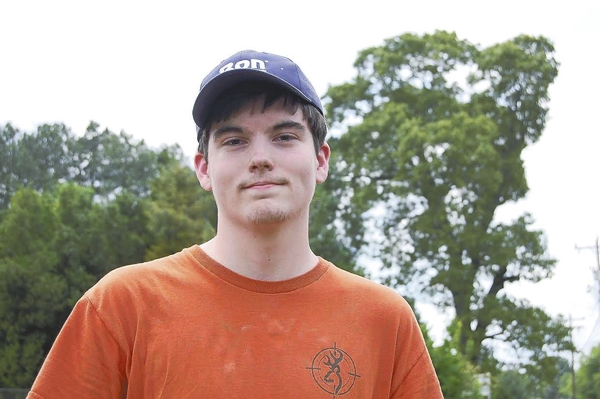 Luke Dutton says he “took a chance” when he signed up for a masonry class as a freshman at West Rowan High School.

That chance paid off, however, when he won the national SkillsUSA masonry competition.

Dutton said his older sisters, who had friends who took masonry, said he would like the class.

“I took a chance on it,” he said, adding that he enjoyed it and began competing in local competitions his freshman year.

“Time was running out, and I hadn’t really done anything with them yet,” he said.

So, Dutton began investing more time and effort into developing his masonry skills.

He began staying after school in the shop laying brick to prepare for competitions.

“I would lay during the day during my class time. After school, I would stay after and lay a complete project start to finish every day,” he said. “You never really know what the project is (before a competition).”

Dutton said he would practice laying straight walls, corners and columns before each competition.

Right before the end of the school year, Dutton and several of his classmates built a sign for the Rowan-Salisbury Transportation Department’s bus garage. Building the sign gave Dutton the opportunity to practice building with real bricks and mortar, rather than with practice sand and lime mortar.

The national competition was two days. The first day included a 20-question written test, then the contestants found out what their project would be the next day.

On the second day, Dutton and the other contestants had six hours to complete a project.

“The project was a corner,” he said. “It had inset brick for the design on the front of it and it had a range of different materials included in it.”

Dutton said he used 4-, 6- and 8-inch block, normal brick and solid brick in his final project.

Halfway though the six-hour competition, Dutton said he was confident he had a good chance of winning.

“I was still nervous about it, but there was some confidence there,” he said. “I had a good feeling about it.”

He said he was pleased with the overall appearance and that he finished 30 minutes early.

“It was clean, and I didn’t splatter mortar all over the bricks,” Dutton added.

When he found out he won the competition, Dutton said he was “overjoyed.”

“It was a pretty long walk to the stage,” he said. “I took off running.”

Dutton graduated from West Rowan High School at the beginning of June. He plans to attend the University of North Carolina at Charlotte in the fall and major in mechanical engineering.

KANNAPOLIS — It’s a well-known fact that fruits and vegetables are both delicious and healthy, but few people truly understand... read more